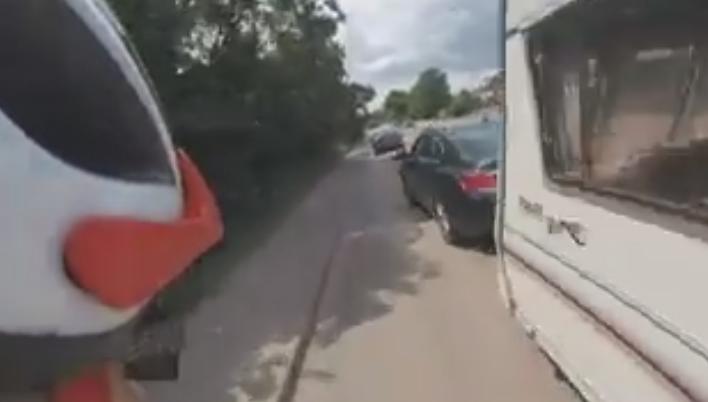 Our regular series featuring close passes from around the country - today it's Warwickshire...
by Simon_MacMichael

Today’s video in our Near Miss of the Day series shows a combination of two factors which have regularly featured over the couple of years in which we’ve been running it.

One is when a motorist overtakes a cyclist at a traffic island, the other happens when the driver is towing something behind his or her vehicle and pulls in to early after passing a rider.

In both cases, the driver’s actions seriously compromise the safe passing distance they are required to give – and when both factors come together, as they do here, the result is that the cyclist can be just a hair’s breadth from being knocked off the bike.

The footage, recorded on the cyclist’s helmet camera, was released by Warwickshire Police, which together with West Mercia Police – the forces run a joint road safety partnership – encourages members of the public to submit video footage under their Operation Snap initiative.

The incident, which happened in Nuneaton last summer, resulted in the motorist being required to attend a driver improvement course at a cost of £85.

One person replying to the post on Twitter said, "That's not much of a deterrent for nearly killing someone," while another reflected, "Tuttle Hill ,Nuneaton is very bad for this, a very dangerous pinch point going downhill, I have changed my cycle route because of near misses."

Taking a risk? We can’t be everywhere, but cameras can; dashcam, helmet, mobile phone or even helicopter. Driver in this clip had to attend a Driver improvement course, costing £85 Don’t risk it#cyclinguk #closepass #OpSnap #ThinkSaferRoads #BadDriving
https://t.co/xvRohVuWpK pic.twitter.com/SGSp5ogOc9