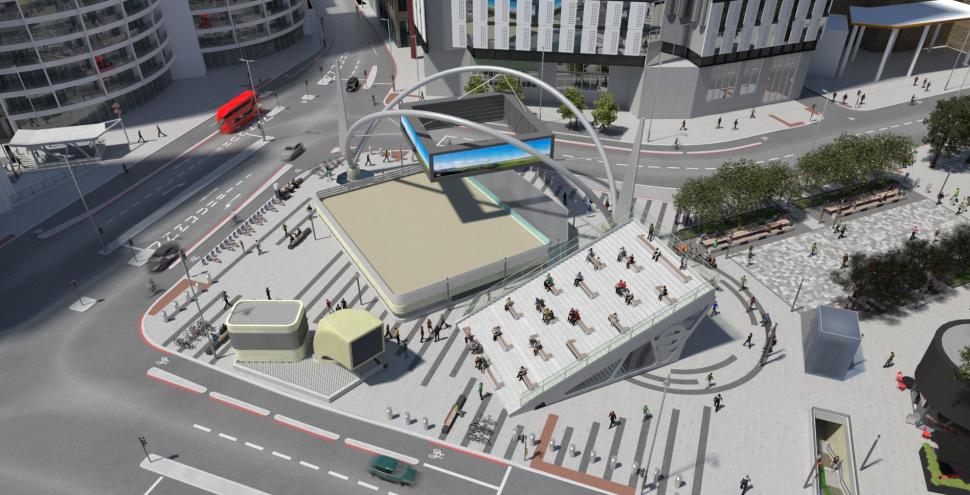 Work has finally begun on transforming London’s Old Street roundabout, with just five weeks remaining of 2018 – the year in which construction was originally due to have been completed.

Under the plans, which went to a public consultation that closed in 2015, the existing roundabout will be removed and road layout changed, with the primary aim of making it a safer space for people on bikes and on foot.

The redesign sees the northwest corner of the roundabout closed to all traffic, with a two-way traffic flow system put in place including fully-segregated cycle lanes and cycle-only traffic signals.

Pedestrian crossings at surface level will replace some of the existing subways below the roundabout, making the junction quicker and safer for pedestrians to negotiate.

The works, being carried out by contractors working for Transport for London (TfL) and the boroughs of Hackney and Islington, are expected to be complete by 2020.

Mayor of London, Sadiq Khan commented: “I announced over the summer that I wanted to see improvements at Old Street brought forward, and I’m delighted that work to transform the junction has now begun.

“Old Street is one of the busiest junctions in London, but is currently an outdated roundabout that needs to be made safer for the thousands of people who pass through it every day.

“New segregated cycle lanes will transform safety for cyclists, and new pedestrian crossings and a new public space will make Old Street cleaner, safer and more pleasant for everyone spending time in the area,” he added.

“Every death or serious injury on London’s roads is one too many, and the improvements at Old Street are part of our ambitious plans to improve road safety all across London.”

Claudia Webbe, Islington Council’s executive member for environment and transport hailed a “bold transformation” that she said would make the junction “fit for the future.”

She said: “This is a once-in-a-generation opportunity to transform a polluted, outdated junction so that priority and space is given to people instead of vehicles.

“This will contribute towards Old Street being a great place to live, work, study and visit with significant safety improvements for pedestrians and cyclists, public transport users, and people who live and work nearby.”

London Cycling Campaign (LCC) said on Twitter that it was “pleased” that the works were commencing, but pointed out that they would be completed two years later than originally contemplated and five years after consultation on the scheme closed.

The organisation repeated its appeal to Mayor of London Sadiq Khan to accelerate the implementation of his Better Junctions programme under which safety improvements are being made to a number of London’s most dangerous junctions.

We are pleased that the long overdue works are finally starting at #OldStreet, but the pace of delivering safety improvements at major junctions has been far too slow. Read our full statement below. pic.twitter.com/cX0ia8V1VN