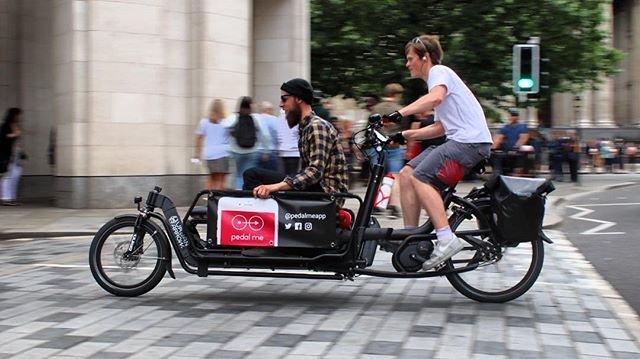 Pedal Me bike in Londn (picture via Pedal Me pn Twitter)

London-based bike taxi and delivery service can continue towards overfunding of up to £500,000
by Simon_MacMichael

Cargo bike taxi and delivery service has smashed its Crowdcube target of £150,000 – just hours before holding a party to celebrate the launch of its campaign on the crowdfunded investment platform at London’s Look Mum No Hands this evening.

The company’s electric-assist cargo bikes are now a familiar sight on the capital’s streets, mostly operating within a five-mile radius of Waterloo Bridge, although it is not unusual to spot them further afield.

The popularity of the app-based service means funds are needed not only to fulfil demand in London but also to expand into other cities both in the UK and abroad.

In bike taxi mode, the company’s riders can transport two adults - they've even done a number of weddings, transporting newly-married couples -while for cargo, it says it can convey “pretty much any load that doesn't need a forklift truck (and some that do).”

One of its main marketing points being that it provides a more environmentally friendly – not to mention quicker – service than rivals that rely on motor vehicles.

The investment will enable the company to add a minimum of 30 bikes in London, enabling faster pick-up times – it is aiming for a maximum of eight minutes within a three-mile radius from the centre of the city – and for jobs to be pulled, bringing down prices.

The money raised on Crowdcube now stands at around £156,000 from more than 200 investors with 25 days left to run of the campaign.

Pedal Me – founded just 18 months ago – said on Twitter today that it is allowed to raise up to £500,000 through this funding round, “to allow us to expand faster and further - increasing our impact.”

*Thank you* to everyone who's invested already. We've reached our initial £150k target.

You can still invest - we've allowed up to £500k of total investment as part of the same round, to allow us to expand faster and further - increasing our impact.