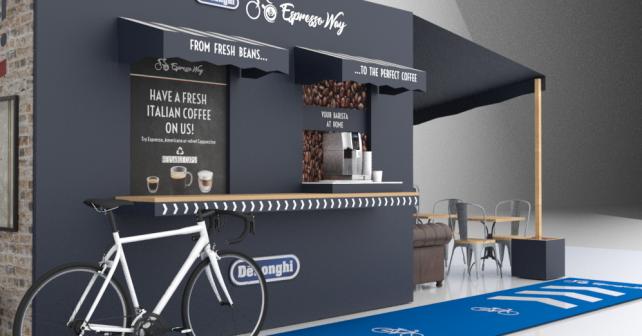 Best be quick though - pop-up from De'Longhi is only open today and tomorrow...
by Simon_MacMichael

What is billed as the UK’s first café you can cycle through while getting your caffeine hit has opened today in – where else? – Shoreditch, east London.

The bad news is that if the thought of being able to grab a coffee on your morning commute through the capital without having to unclip fills you with joy, the Cycle-Thru Coffee Shop at Shoreditch Boxpark is only open today and tomorrow.

The good news is that espresso at the pop-up, which you make yourself with a press on the button of a coffee-making machine from Italian brand De’Longhi, which is behind the concept, is free.

The pop-up was opened this morning by Sir Chris Hoy, who also shared his thoughts about how to encourage more Londoners to cycle – read them on our live blog.

The De’Longhi Cycle-Thru Coffee Shop is open today and tomorrow from 7am to 4pm and can be found at Boxpark Shoreditch, 2-10 Bethnal Green Road, E1 6GY.

Britain’s cyclists aren’t always made so welcome at drive-thru establishments.

In 2013, we reported how Portsmouth cyclist Alistair Thompson was refused service at a drive-thru McDonald’s in the city when he tried to order food when he and his four-year-old son were on a bike ride.

He complained to the fast food giant’s head office, although it is fair to say he didn’t create the same stink a woman on horseback did earlier that year when she was refused service at another of the chain’s drive thru branches, this one in Greater Manchester.

Told she would have to go into the main restaurant to order food, she did just that while still mounted on her horse – which promptly defecated on the floor.