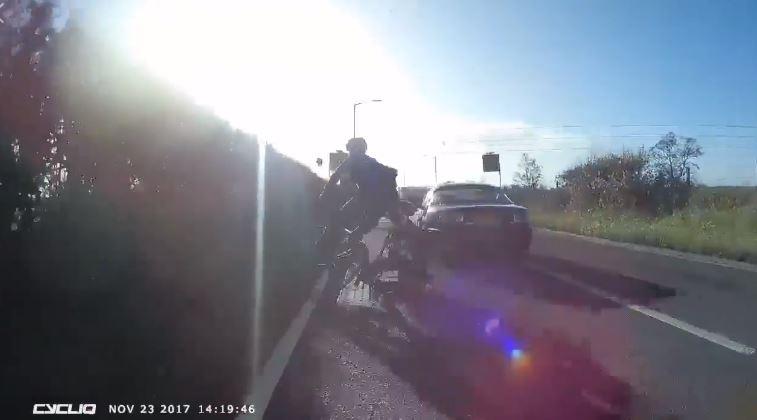 A Somerset cyclist has released shocking video footage of the moment a motorist ploughed into the group he was riding with, leaving one of them – his wife – unconscious.

Prosecutors decided not to proceed with a separate charge of causing serious injury by dangerous driving following his guilty plea to the less serious charge, reports Somerset Live.

Tarrant, from Wincanton, will have to take an extended retest to get his licence back once his ban expires.

He was given a conditional discharge and ordered to pay a £20 victim surcharge.

The footage was shot in Mudford, near Yeovil, on 23 November 2017 by Martin Wills who was on a group ride with fellow members of Yeovil Cycling Club, reports Somerset Live.

Shot from both front- and rear-facing cameras, it shows Tarrant knocking several cyclists from their bikes as he passed them at speed.

Mr Wills said: “The first shows my wife Sandra being hit. The second video shows one of the group being knocked off and crashing into me.”

In an interview with Somerset Live shortly after the incident in November 2017, Mr Wills gave a fuller account of how it unfolded.

“The first I knew was a heavy blow to my right buttock,” he explained.

"This sent me off balance and I fell heavily with my bike landing on top of me.

“Propping myself up, I found I was looking north along the road we had come down.

“One of the riders was lying in the road a few feet away with her wrecked bike next to her.

"Another rider, who had miraculously escaped injury, was putting my wife, who was unconscious, into the recovery position,” he continued.

“Several cars had stopped and three of the occupants were first aiders, who immediately joined us attending the three prone ladies.

“As I was speaking to my wife she regained consciousness but had no recollection of what had happened or where she was.

“Two people were attending to another of the riders so I had a look at one of the other riders, who was in shock and shivering violently.

“Her bike lay behind her completely wrecked. A lady from a following car covered her with a coat and stayed monitoring her.

“I returned to my wife and within 15 minutes the ambulances and paramedics arrived.”

Four of the cyclists required hospital treatment and Mr Wills added: “Apart from being knocked unconscious, my wife sustained a broken finger, cracked ribs, a bump on the back of her head and various bruises. I had cuts and bruises.

> Four cyclists in hospital after driver hits group ride from behind

“The emergency services did a brilliant job. The paramedics, ambulance and first aiders were all brilliant. Yeovil Hospital also treated us quickly, efficiently and with compassion during this stressful incident."