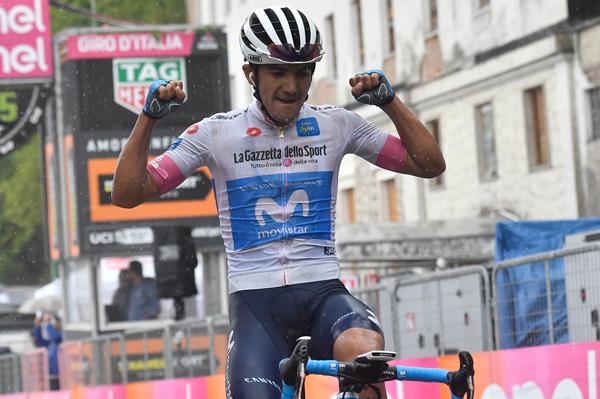 Richard Carapaz (Movistar)attacked towards the top of the final climb to take Ecuador’s first ever Grand Tour stage victory on the second summit finish of the Giro d’Italia. Chris Froome (Team Sky) finished safely in the group of favourites, despite coming a cropper in wet conditions with around 5km to go.

The closing kilometres of the 209km stage from Praia a Mare to Montevergine di Mercogliano saw torrential rain and with 5km of the final climb to go, Froome’s wheel slipped out on a corner.

The Team Sky leader successfully chased back on with the help of team-mates and will be glad to have avoided time losses.

Carapaz, who was already in the white jersey as best young rider, was delighted with his win.

"I’m very happy, I have worked a lot before the Giro. Of course having the first Grand Tour win – it’s emotional.

"I had good legs, so I decided to attack from far out – 2km to go. I decided it was the right time to go alone, because I knew I couldn’t win in a sprint.

"I’ll take it day by day. There is still a long way to go to Rome, but I’m here to see what I can do at the Giro."