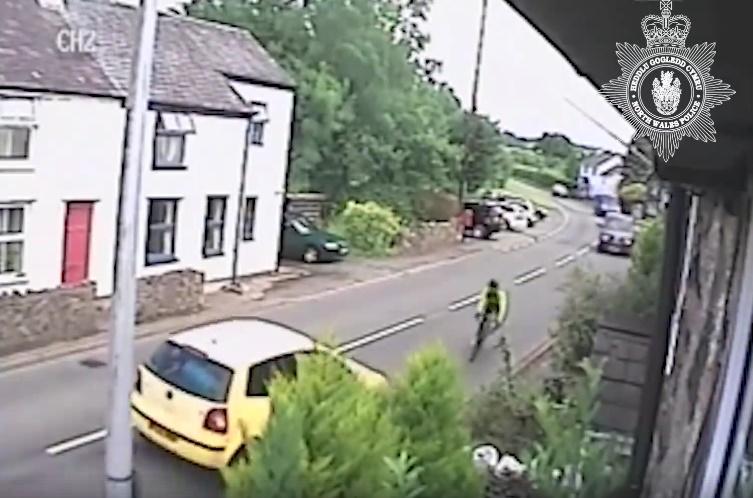 North Wales Police have released footage of the moment when a motorist ploughed into an oncoming cyclist following “a momentary lapse into sleep”. Jake Tompkinson was sentenced to 12 months and banned from driving for two and a half years for the collision in which Gareth Evans sustained 22 injuries including a punctured and bruised lung, four broken ribs, a broken eye socket and collarbone, and two broken toes.

The Daily Post reports that Evans also suffers post traumatic amnesia, and has lost his sense of smell and taste.

Tompkinson had led an overnight trek on Snowdon until 6.30am and after breakfast set off from Llanberis for home. The evening before, he had had five and a half hours sleep.

Alistair Macdonald QC, defending, said the crash was due to “a momentary lapse into sleep.”

Tompkinson admitted his fault immediately and gave first aid at the scene.

“You should have stopped and had a nap – there were two opportunities to do so,” said Judge Hale. “You were tired, you knew you were tired.”

He added: “You were responsible for causing very serious injury to Mr Evans by the way you drove that car on that sunny morning. The car is a lethal weapon.”

Investigating Officer, PC Einion Huws said: “The manner of Tompkinson’s driving was reckless and irresponsible and it is only by pure luck that we did not investigate this as a fatal collision.

“This collision was entirely preventable and shows what the consequences can be when drivers are not concentrating when behind the wheel whilst tired, and I would urge all motorists to adhere to the warning that tiredness can kill.

“As a result of the collision the cyclist was left with serious injuries and we would like to wish him a speedy recovery.

“I hope the sentence handed by the court will send out a very clear message that anyone convicted of such offences will be dealt with robustly.”

Reacting to the sentence, Evans said: “He fell asleep, it was an accident. I have no idea if the guy that did this to me is a good guy or not, but him going to jail doesn’t really make me feel any better.

“It means his life will be ruined as he’ll have a criminal record. I’m surprised he got a year, but I think the judge must have been shocked by the footage of the accident.”

He added: “I’m having an operation to pin my collarbone. I honestly don’t think I’ll be able to work this year.

“My life is shattered, and I’m in pain every day. But as a cyclist you can cope with pain and I’m getting used to it. Whenever I feel sorry for myself, I just tell myself I could have ended up in a wheelchair or dead.”