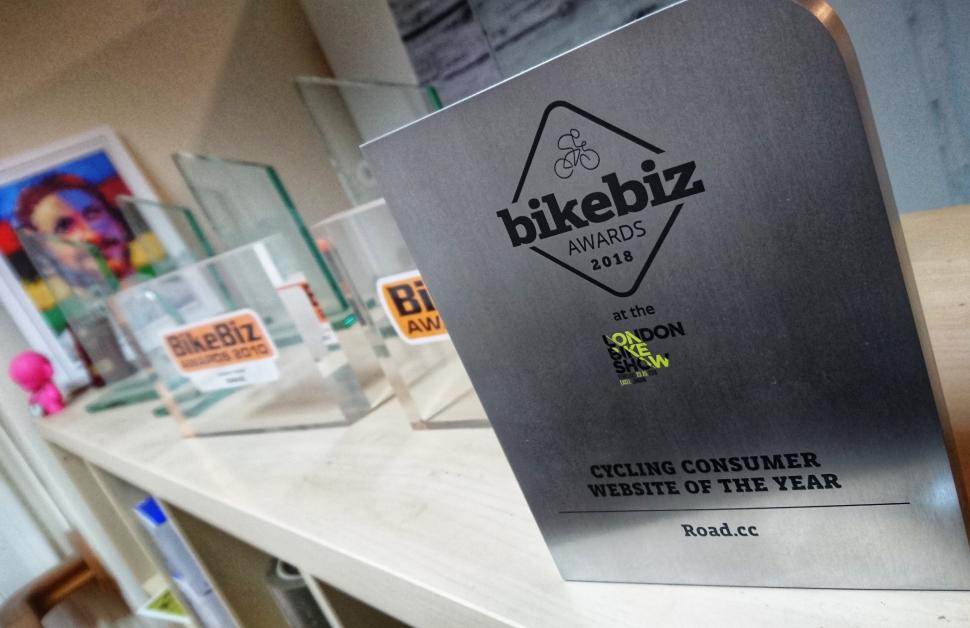 Big pats on the back all round as road.cc comes out on top and off.road.cc gets nominated too
by

The road.cc awards cabinet* is looking a bit fuller this morning after we walked - or indeed rode - away with the Best Consumer Cycling Website award at Friday night's BikeBiz awards, held at the London Bike Show. Our sister site off.road.cc also got nominated for the award, a great affirmation of their position in the cycling media landscape after only eight months.

road.cc has previously won the award in 2010, 2011, 2012 and 2014, so we've managed one every two years during the time the site has been live. The site has also won various social media awards, and contributors Jo Burt and Mat Brett have picked up individual awards too.

"For the past few years the Media awards have existed in their own bubble, with their own ceremony", said road.cc co-founder Dave Atkinson who picked up the award, "but this year everything has been brought back together and it was great to be able to share an evening with the industry."

"We're in our tenth year now, and I guess that makes us part of the establishment in a way. So it's great to get this award, voted for by people across the cycle industry, as recognition of the work that we do. We try very hard to make road.cc engaging, friendly, authoritative and relevant. Thanks to everyone that continues to support and visit the site. We'll strive to make it even better."

Commenting on road.cc's win, editor, Tony Farrelly said: "Wot Dave said, except for that bit about being part of the establishment", before adding "the cycling media landscape is a very dynamic and competitive one, and both road.cc and off.road.cc are competing against rivals from much bigger and better resourced media companies so it's very gratifying to be acknowledged as leading the field and is a fitting reward for the dedicated hard work the road.cc team put in to making the site as good as it can be . This is their award and we'll be letting each one of them take it home for a month at a time – on payment of a small deposit."

*It's the top of a bookcase