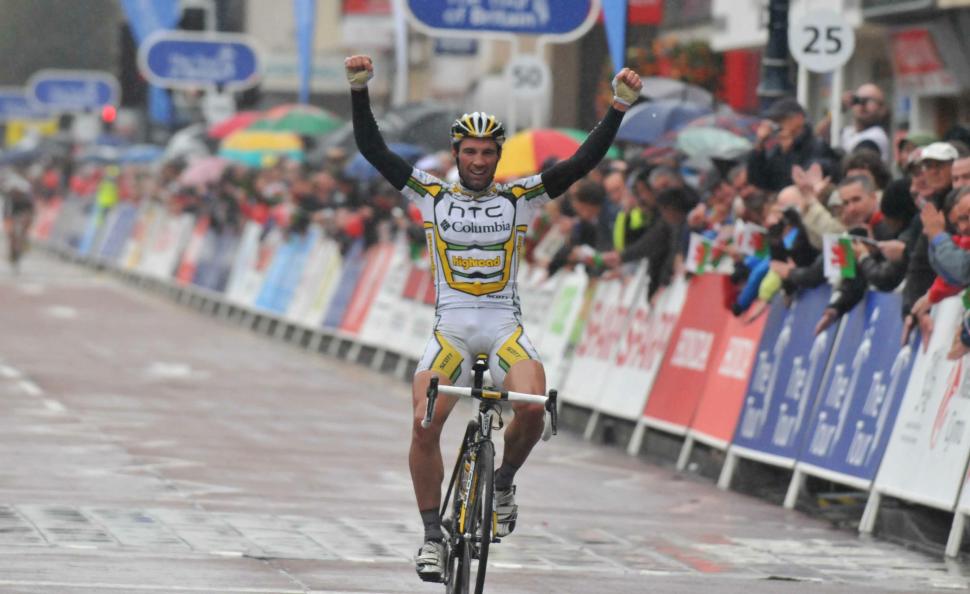 Rain and fog wreak havoc in Wales, Rapha-Condor-Sharps' Darren Lapthorne out with broken collarbone...
by Simon_MacMichael

Michael Albasini of HTC-Columbia attacked on Swansea’s infamous Constitution Hill and held his nerve on a fast descent towards the finish on roads made slippery by heavy rain to win Stage 3 of the Tour of Britain and take the race leader’s yellow jersey from Team Sky’s Greg Henderson. What's more, he now leads the New Zealander and Team Saxo Bank's Richie Porte by just shy of a minute and a half, a solid lead approaching the halfway point of the race.

The 30-year-old rider (pictured on the podium, below), who hails from Mendrisio in Switzerland, the venue for last year’s World Road Race Championships, finished second to Henderson in Stoke-on-Trent yesterday, but seized the initiative today as the race headed up what many consider to be Britain’s hardest climb, only 300 meters long but with a gradient hitting nearly 30% in places, the difficulty increased by the effect of the rain on the cobbles. 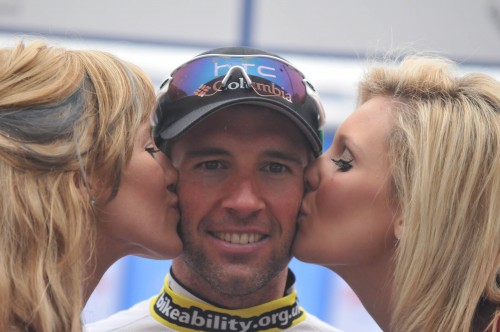 It wasn’t just the rain that made conditions treacherous as the peloton rode through Wales, with fog on the Black Mountain on the western edge of the Brecon Beacons presenting a danger on the descent towards the coast, restricting visibility and ending the race of Rapha-Condor-Sharp’s Darren Lapthorne, who was taken to hospital with a broken collarbone after crashing on a descent.

The attacks began almost as soon as the flag dropped to signify the start of the stage proper in Newtown this morning, with Dan Martin of Garmin-Transitions and Ian Bibby of Motorpoint-Marshalls Pasta the first to go off the front, but the pair were soon reeled back in.

The peloton crossed the first KOM climb at Gwynant together, with maximum points claimed by Wout Poels of Vacansoleil, who had worn the mountains jersey after Stage 1 into Blackpool, while the current leader of the KOM classification, Richie Porte of Team Saxo Bank, was fourth.

Second place was taken by Poels’ team mate, Johnny Hoogerland, who won the Honda Combativity Award for his attacks yesterday, while Jeremy Hunt of Cervelo TestTeam, preparing for next month’s World Championships, was third.

Despite yet more attempts by riders to launch attacks, the peloton was still together as the race passed the first sprint point in Llandrindod Wells, Cervelo TestTeam’s Heinrich Haussler reaching the line ahead of Vacansoleil’s Borut Bozic, with Albasini taking third spot from Henderson.

With around 50km racing behind them, a break finally managed to get clear, initially comprising Cameron Meyer of Garmin-Transitions and Vacansoleil’s Pim Lighart. The group swiftly grew to nine riders, and although Meyer later attacked on the Black Mountain and managed to put more than a minute into his fellow escapees as he attempted to go for a solo win, he was caught as the race headed into Swansea.

By now, the race was strung out back along the road, with the final riders still some 10km out by the time Albasini crossed the finish line to claim his hard-earned victory.

Afterwards, Albasini said: “From the start I felt really good. Our tactic was to make the race fast and also hard, so that we could maybe try something on the longer climb. For the first 50 kilometres there was just attacking and attacking, so on Black Mountain my team made good pace and then together with the riders from Vacansoleil we rode really hard up there.”

He continued: “It was a small group at the top, and then on the downhill it was wet and fast. Tony Martin and I arrived full gas, so we made a small gap and went away. Tony did a really really big job, it was just me and him to ride, so it was really hard. In the last ten kilometres I did maybe only two turns, the rest was always Tony pulling so I could recover a little bit for the steep climb and cobblestones.”

The Swiss rider, who won the overall title in the Tour of Austria last year, believes that he can wear the yellow jersey all the way to the capital on Saturday.

“Of course! It’s now a big goal to bring the jersey to London,” he said. “If you look today at the race you saw a really strong HTC-Columbia team, we were always attacking and even on the climb the sprinters were making tempo. With teammates like Martin, [Marco] Pinotti, [Bert] Grabsch, [André] Greipel and Mark Renshaw, I’m sure we can do it,” he added.

One rider looking to challenge Albasini, however, is Porte, who in May wore the maglia rosa for three stages of the Giro d'Italia and ended up topping the young rider's classification at the end of the three-week race.

“I think I’m climbing as one of the strongest in the race,” the Tasmanian claimed. “For me I’m more interested in the classification, but obviously it’s nice to have a jersey, so we’ll defend them as much as we can.

“I’ve got such a good team here, I’ve got a good Director Sportif in Torsten Schmidt, so I’m sure he’s got it all planned,” he continued.

Meanwhile Rapha-Condor-Sharp 's former British national champion Kristian House, who ended the stage in the same group as Henderson, gave an account of conditions on the Black Mountain. "Dan [Craven] was in front of me most of the way but he was fading towards the top, it was quite rainy and misty up there, you really couldn’t see anything and for a long time I assumed he was there.

"I tried on the radio but you couldn’t get any answers back from anyone. To put it in perspective I didn’t even know Zak [Dempster] was there until the descent and I thought if Zak was there Dan must be too. It was that fast and the conditions that bad that you couldn’t really do anything except try and stay where you were.”

Team mate Dan Craven, the highest placed Rapha-Condor-Sharp rider at the start of the stage, slipped two places from 10th to 12th, although the confusion caused by the conditions meant he wasn't sure initially how the time he lost had affected his position in the overall standings.

“Out of the 15 in the group with me yesterday [on Stage 2 into Stoke-on-Trent] I know three were behind so I can’t be lower than 12th, I expect to be 11th or 12th overall tonight," he explained afterwards. "I assume the ones I couldn’t see were up the road but we just have to see, now that today has had another selection there might be a few guys who aren’t so fussed about a top ten whereas I’m keen to get back there,” he added.

Tomorrow's Stage 4 follows the same route as The Prostate Cancer Charity South West Tour Ride held the weekend before last between Minehead and Teignmouth, and is considered the hardest one of the race, including Peak Hill near Sidmouth.