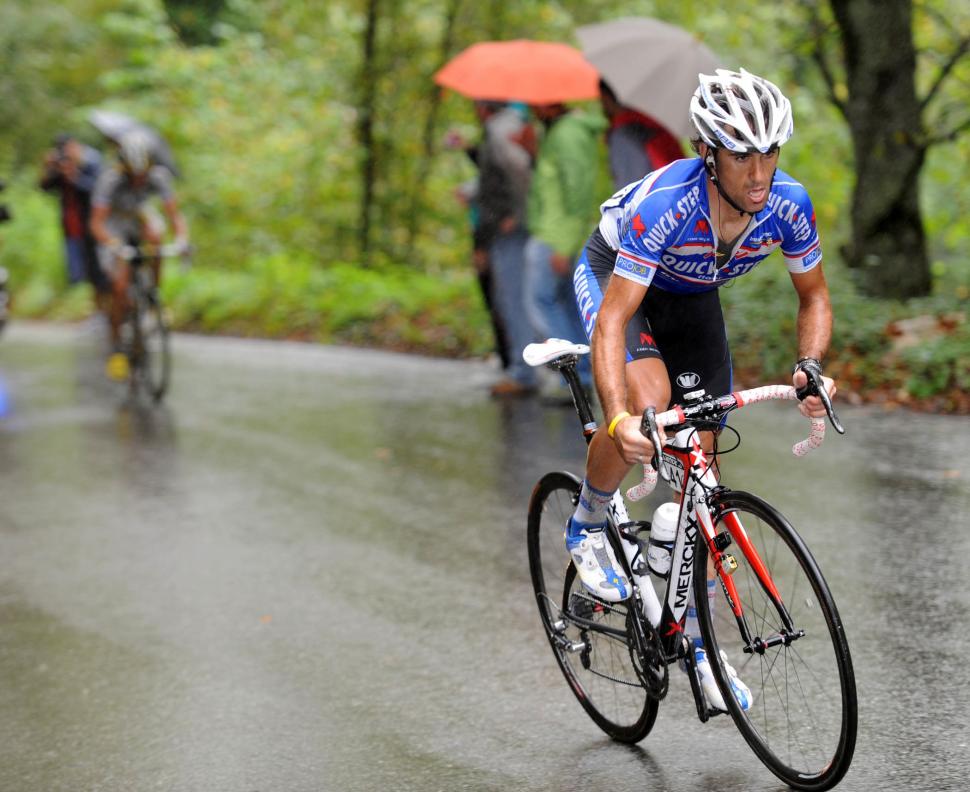 Tondo's tears as he loses time after failing to follow team mate Sastre's attack...
by Simon_MacMichael

The history of cycling is full of tales of riders who managed to find extra inspiration when the route of a grand tour or some other big race took them through home roads, but rarely can a win have had as much personal resonance as that of Carlos Barredo this afternoon at Lagos de Covadonga, the Quickstep rider first battling up the climb to the summit as a boy following a challenge from his grandfather, his prize being his first road bike.

The 29-year-old hails from the Principality of Asturias, whose border was crossed halfway through today’s 187km stage, by which time he was already part of a 15 strong breakaway group. He went on the attack 10km from the summit to ride away and win by more than a minute from Nico Sijmens of Cofidis.

“It’s a great joy to win at home,” exclaimed Barredo afterwards. “I was born in Gijon and I’ve lived 30 kilometres away from the stage finish here. I’ve been waiting for such a nice win since the Clasica San Sebastian in 2009,” he added, referring to the one-day race that until today had been the biggest victory of his career, adding, “I came close in Pau at the Tour de France, where I got caught inside the last kilometre.”

The Quickstep rider went on to explain that winning on what is perhaps Spanish cycling’s most fabled climb was of greater significance to him than just the fact it happens to be close to home.

“For a while I had put mark on this stage up to the Lagos de Covadonga and tomorrow’s to Cotobello,” Barredo revealed. “It’s special for me to win here because I remember I asked my dad to buy me a racing bike when I was a kid. My grandfather suggested to me to borrow a bike first and climb up here, to the top of the Lagos de Covadonga. I found a mountain bike, I made it, and my reward was a racing bike. Years later, it’s symbolic for me to win up here.”

Of course, riding an ascent familiar to him from his earliest days certainly didn’t harm the Spaniard’s chances of coping with the ascent better than the other members of the breakaway.

“In the finale, I was a bit worried when Martin Velits [of HTC-Columbia, one of his fellow escapees] attacked but it played to my advantage to know this climb,” he said. “I knew that I’d win if I could stay with away after the steepest part of the climb,” he added, and so it proved.

Behind him, battle was being joined once again for the overall title, with just four seconds separating race leader Vincenzo Nibali of Liquigas Doimo from Katusha’s Joaquin Rodriguez this morning, and Xacobeo-Galicia’s Ezequiel Mosquera and Cervélo TestTeam’s Xavier Tondo both just 50 seconds behind the red jersey.

By the end of the stage, Mosquera had ridden off the front of the main contenders’ group to make up 11 seconds on the two leaders, but a distraught Tondo had slipped to fifth place, two and a half minutes off the leader, after finding the pace too tough to handle following an attack by, of all people, his team mate at the soon-to-be-dissolved Cervélo TestTeam, Carlos Sastre.

At the finish, an emotional Tondo briefly mentioned Sastre’s sudden acceleration as the reason he was dropped from the GC group, but as the tears started to flow, he had no further words to offer regarding the stage.

For his part, Sastre, who next season rides for Geox, as Footon-Servetto will be renamed, didn’t dwell on Tondo’s difficulties, focusing instead on his own performance following hat has been a disappointing and draining season in which he has ridden in all three grand tours.

“Moving forward, I can count more on my heart and my will than on my strength, that’s the truth,” he confessed. “I’ve tried once more but honestly, there are stronger riders than me. But I want to win a stage for putting an end to two difficult years marred by injuries, sicknesses and different problems.”

Meanwhile Nibali (below), unexpectedly in the red jersey after its previous wearer Igor Anton of Euskaltel-Euskadi spectacularly crashed out of the race yesterday, said that being the overall leader had forced him ride a different race today, and that he’d also learnt from the experience of earlier stages in the race. “I haven’t made the same mistake as in Andorra when I tried to follow Mosquera and I burned myself,” explained the Sicilian. “I’ve only looked at saving my leadership,” adding, “My team has done a great job for that. They rode in the front from the start till the bottom of the climb, Oliver Zaugg and Roman Kreuziger did the final part. We coped with the situation really well. I set a regular pace all the way up, my back wheel slipped with about three kilometres to go [but] that was about my only worry of the day.”

Turning to his rivals, Nibali said: “I was more concerned about Sastre’s attack than Mosquera’s, but Roman did the maximum effort at the right time. He was brilliant. I have never been scared of Mosquera. Look, he’s done 5 kilometres of climbing flat out, and what’s his benefit? 11 seconds… that’s no big deal for me. I’m serene and happy to have passed one more day with no problem.”

The 25-year-old from Messina, who briefly wore the Giro d’Italia’s maglia rosa on his way to a third place finish behind team mate Ivan Basso, continued: “This is not the first time I’ve leda big race, but this time I strongly hope to carry the jersey till the end,” adding that he thought tomorrow’s Stage 16 from Gijon, which has two category one climbs on the way to a summit finish at Cotobello, would follow a similar pattern to today’s race.

“There are many more climbs but I’m very confident in the work of my team,” he concluded. “I want to arrive at the time trial with about the same advantage I have now.”

Rodriguez is aware that tomorrow, one of only two mountain stages left, the other being the penultimate day’s stage with a finish in the mountains outside Madrid, is a day when he simply must go on the attack.

“In tomorrow’s stage to Cotobello I have to gain time on him,” the Katusha rider explained. “If I don’t, it’ll become more complicated to win the Vuelta because the 46-km time trial to Penafiel on Wednesday doesn’t suit me. Fortunately, that won’t be the end of the race because there will still be the long climb to Bola del Mundo on Saturday.”

Ezequiel Mosquera, pictured below and third overall, said: “I’ve hurt my legs in this climb but that’s just like what everyone felt I guess. I attacked in the steepest part of the ascent to the Lagos. I didn’t remember exactly how the final kilometres were with the downhill section, but I gave everything until the end. Tomorrow will be another difficult day for the team of the leader. I’ll try to get more time on him as I need to before the time trial but it won’t be an easy thing to do,” insisted the Xacobeo-Galicia rider. 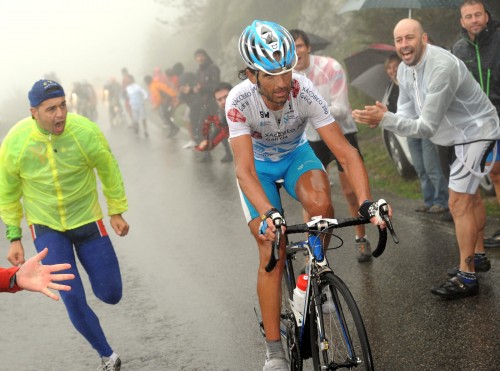 With three categorised climbs and a summit finish, tomorrow’s 181.4km stage is also likely to see David Moncoutié, pictured below, attempt to consolidate his lead in the mountains classification, which he won last year. The Cofidis rider currently has a nine-point lead over Xacobeo-Galicia’s Serafin Martinez.