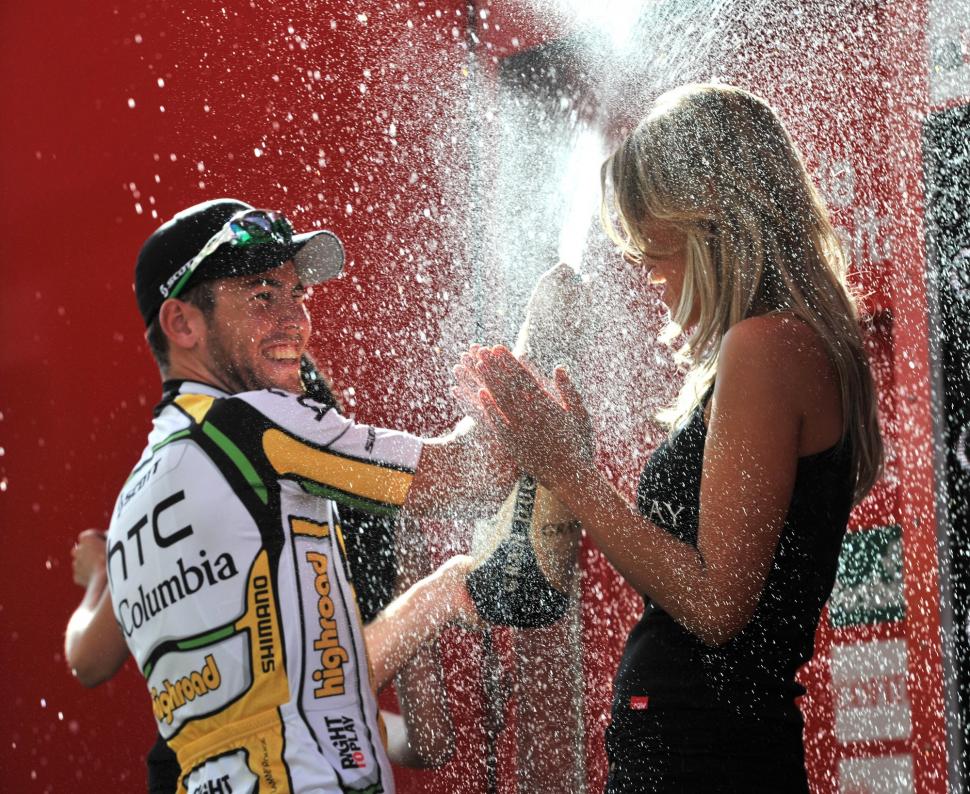 Win gives Manx Missile commanding lead, but focus now on GC as race heads back to mountains
by Simon_MacMichael

Mark Cavendish this evening paid tribute to his HTC-Columbia colleagues, saying “we’ve always been a star team rather than a team of stars,” after Matt Goss again led him expertly through the last corner to set him up for his second successive stage win in the 2010 Vuelta. The victory very much puts the Manx rider in prime position to stand on the podium in Madrid a week on Sunday as winner of the points classification.

Cavendish would become only the second Briton to achieve such a feat in a Grand Tour – the first, Malcolm Elliott, whom the Manx Missile emulated yesterday by winning a stage finish in Lleida, having done so in 1989.

As was the case 24 hours earlier, the finale of today’s stage saw the peloton have to negotiate a tricky right hand bend, and once again Matt Goss expertly led Cavendish the quickest way through it, the Australian somehow finding a gap between the riders to his outside and the railings on his inside.

The pair, nowhere in sight as the race headed into the last corner, were suddenly at the front of the bunch coming out of it, Cavendish holding on to seal victory despite the efforts of Cervelo TestTeam’s Thor Hushovd and Liquigas-Doimo’s Daniele Bennati to catch him. “Once again the team did its homework,” explained Cavendish afterwards. “We knew the last corner was wide. Everyone else braked but Matt Goss and I were able to dive-bomb the corner – Goss took the inside and we just bombed through. He was so fast coming out of the turn I had a hard time holding his wheel,” the Manxman confessed. “I was already in the red. He’s just so fast and explosive! I hope he can get a stage win, too,” he continued.

“The team did a fantastic job all day but unfortunately without Hayden Roulston because of a problem with a muscle on his knee, I think,” added Cavendish. “He pulled the tendon, I hope he’s okay. It’s a big loss after Bernhard Eisel’s early retirement. It’s hard to lose the biggest engine we had here. However, we have a very committed group of young guys. They do well to step into the void, also riders like Tejay van Garderen who’s here for GC. It’s an incredible group of guys I’m working with. I’m proud of them.”

Goss for his part revealed afterwards just how tight that last corner was, as well as acknowledging the similarities with the previous day’s finale. “This has a taste of déjà vu, right? We had a bit more work than yesterday and it becomes a little bit tricky with one guy less but yeah, the outcome was a bit similar as yesterday. The last corner was further from the line though. I had to go underneath a Katusha rider.”

The Australian continued: “I knew Cav was on my wheel because I had seen him next to me in the corner. It’s good to show that winning wasn’t just a ‘one shot’ yesterday. It’s the first time Cav, myself and the other guys are working together and it’s to see the work paying off.”

Ahead of this afternoon’s sprint finish, Niki Terpstra of Milram (below, 2nd right), involved in a day-long escape, launched an out and out attack as the race entered Burgos to try and solo his way to a win, but was swept up by the peloton with less than 5km to go. 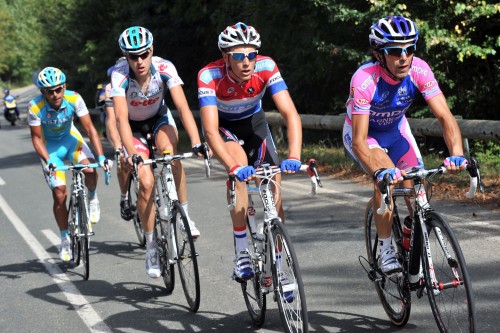 “The course suited me, so I had to try something. I guessed it would be hard to succeed,” Terpstra, racing in the colours of Dutch national road race champion, revealed afterwards. “It’s frustrating to work the whole day for nothing but sometimes it works.”

Prior to the day’s break forming, Cavendish had gone off in pursuit of points at an intermediate sprint just 8km into today’s stage, but was beaten to the line by Tyler Farrar of Garmin-Transitions and Quickstep’s Wouter Weylandt.

“I’ve lodged an appeal about the first intermediate sprint where Tyler Farrar closed the door on me,” the 25-year-old disclosed after winning the stage. “This is the first protest of my life,” he added.

“Whether the result gets revised or not,” – according to this evening’s official results, it didn’t – “I have a nice cushion of points but in the next three days, the climbers are likely to score a lot,” Cavendish maintained.

That may be the case, but Cavendish is a strong favourite to take the first Grand Tour points classification win of his already stellar career. The nearest rider to him is Farrar, but he lies 21 points behind, and the Garmin-Transitions rider will be competing for the same points as Cavendish, whether in intermediate sprints or in the three potential remaining sprint finishes.

After finishing sixth in the sprint today, Farrar said: “Everything was perfect until the crazy corner with 500 metres to go. It’s a pity I couldn’t do better because of all the work my team did before the sprint.”

The American added: “I’m not worried about the world championship right now, I’m worried about winning one more stage at the Vuelta and the green jersey that I keep in sight. I’m not totally wrecked.”

As for the climbers, the best placed in the points competition, and realistically the only rider besides Farrar who can threaten Cavendish, is Igor Anton, 36 points him, but his have been accumulated in pursuit of the overall title, and there’s little prospect of him looking to pick up any intermediate points.

Even if Anton, pictured below, were to win the four remaining mountain stages – and what a stunning, if unlikely, achievement that would be – the maximum gap he could build on Cavendish, based on 25 points a stage, would be 64 points, reducing with each intermediate point the Manxman manages to take. 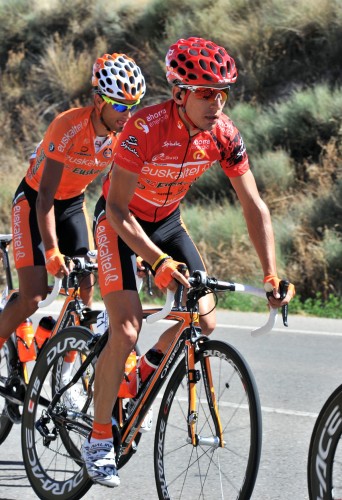 In any event, the Basque rider has other battles to fight as his GC rivals draw up their own plans for a weekend in the Cantabrian mountains that, together with Wednesday’s individual time trial in Peñafiel and next Saturday’s ascent of the Bola del Mundo outside Madrid will decide the destination of the overall title.

With three riders in the top seven of the overall standings, Caisse d’Epargne clearly represent a big threat to the Euskaltel-Euskadi man’s dreams of topping the podium in Madrid a week on Sunday, and one of their riders, Luis-Leon Sanchez who lies 16th in the GC, relished the challenge ahead.

“We’re now entering the decisive part of the Vuelta with three uphill finishes: Peña Cabarga on Saturday, Lagos de Covadonga on Sunday and the very hard finish of Cotobello on Monday,” he explained. “Our Caisse d’Epargne team has a good role to play. Our numbers are our strength. Personally, with a 3.40 deficit, I’m not bad and not well but I know I shouldn’t wait for too long.”

Finally, back to today’s winner, Mark Cavendish, who explained why he pulled a bunny hop as he crossed the line. “My jump on the finishing line was my way to show my sponsors how happy I am with what they provide to the team,” he said. “We get a great selection of tyres and we’re supplied by Shimano for the components. It’s kind of the same thing I’ve done for HTC and for Oakley in the past. It’s nice to give something back to the people who give to the sport.”