Look have never been a company to shirk a bit of innovation; they were clipless pedal pioneers and early adopters of Carbon, and they've been tinkering ever since. Their new 695 road frame is the culmination of a number of strands of development, and the resulting bike is dripping with new features.

Firstly, the frame. It's a Carbon fibre construction and while the main tubes are fabricated using fairly standard methods, Look's latest layup techniques attempt to get continuous fibres running all the way along the main tubes, which allows them to use less material for the same strength. The front and rear dropouts are Carbon too, forged via a process that uses much higher pressures (250 bar, rather than 8 bar for the tubes) and then punched out much like an alloy unit. Higher pressures are used for the head tube, bottom bracket area and seat tube junction too for extra strength. 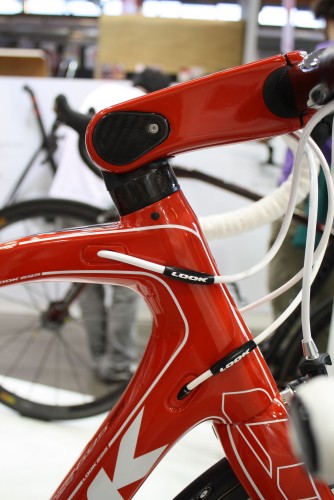 The fork is a Carbon monocoque and Look have tried to eradicate any right angles in the mould where stress can build up. The steerer is conical and runs on asymetric bearings, and there's a flat section at the front and rear of the steerer developed to guard against pinch damage from stems and also make the fork stonger in frontal impacts. The stem itself is chock full of new features: for a start it's incline adjustable through about 20 degrees to allow you to fine-tune your fit, and it's also length adjustable via a half-moon-shaped insert that gives you 10mm of extra cockpit room. 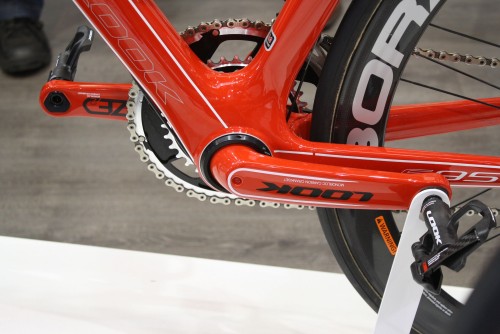 The crankset is probably the biggest devation from the norm though. Look use a one piece crank system – think BMX cranks, only made out of Carbon and weighing about 350g – that you feed through the frame and secure in place with a lockring. They use huge bearings and the construction suggests they'll be super stiff, though we haven't tried the bike on the road yet. If you don't want to use Look's crankset or stem for any reason, you can swap them out for standard kit.

In a year at Eurobike when we heard a lot about what colour 2011's bikes were going to be, and not too much about new technologies, the Look was rather a breath of fresh air, and a jolly good looking one at that in the opinions of most of the road.cc commentators. not everyone liked the stem though... We'll certainly be putting our names down for a go on one when they make it over to Blighty.