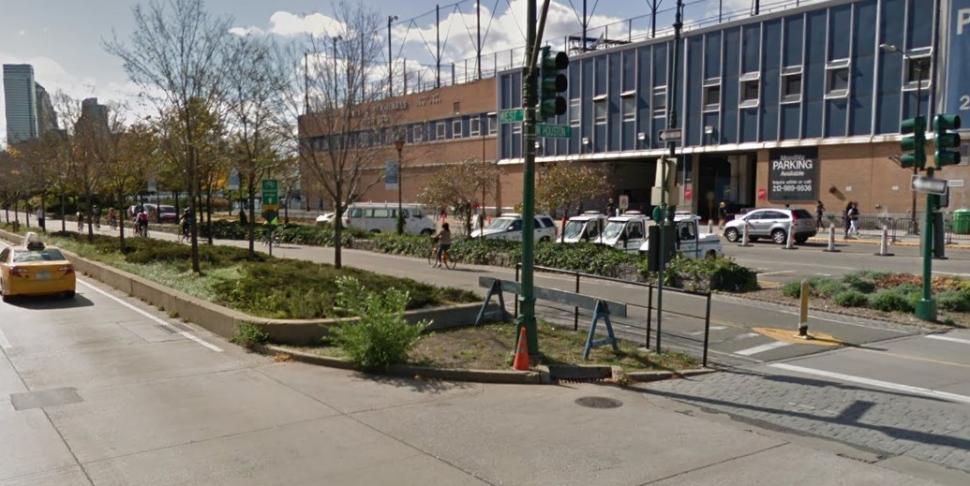 Campaigners had called for vehicles to be blocked after cyclist's death more than a decade ago...
by Alex Bowden

The Manhattan cycle path where eight people were killed during this week’s truck attack has reopened. Floral tributes have been laid, but it has also been revealed that campaigners called for bollards to be installed at entrance points after a cyclist was hit and killed by a drunk-driver over a decade ago.

The four-mile-long Hudson River Park Bikeway is the busiest bike path in New York, used by around 6,000 cyclists a day.

Sayfullo Saipov is accused of driving a truck down it on Tuesday, killing eight people and injuring 12. He reportedly told investigators he had been inspired by watching Islamic State videos.

AFP reports that the path reopened yesterday. "We are stronger. We are NYC," is chalked on the ground and in amongst all the flowers, an Argentina football shirt hangs in tribute to the five Argentine friends who were killed while cycling on a high-school reunion trip.

This was not the first time a cyclist had been killed by a vehicle on the segregated track. The New York Times reports that in 2006 a drunk driver mistakenly turned onto it and drove for nearly a mile before hitting and killing Eric Ng.

Most of the path is edged by concrete and other barriers, but in the wake of the incident, there were calls for metal bollards to be installed at access points where cars can turn onto the path.

“While terrorism is not preventable, the ability for a driver to drive there was,” said Caroline Samponaro, the deputy director of Transportation Alternatives.

The campaign group has been calling for retractable bollards at crossings so that emergency vehicles can still gain access.

One of the busiest access points is at Pier 40 at West Houston Street, which is where, according to the police, Saipov got onto the path.

Polly Trottenberg, the city’s transportation commissioner, said that the state had installed bollards near Chelsea Piers after Ng’s death, but none further south than West 17th Street.

Joseph Morrissey, a spokesman for the state Department of Transportation, said that the agency “will be undertaking a top-to-bottom review of these recreational spaces and evaluate any new measures to further enhance security.”

The Stopping Threats on Pedestrians Act (STOP Act) would set aside $50m each year for the installation of bollards, planters and other barriers to separate bike lanes and pedestrian paths from vehicles.