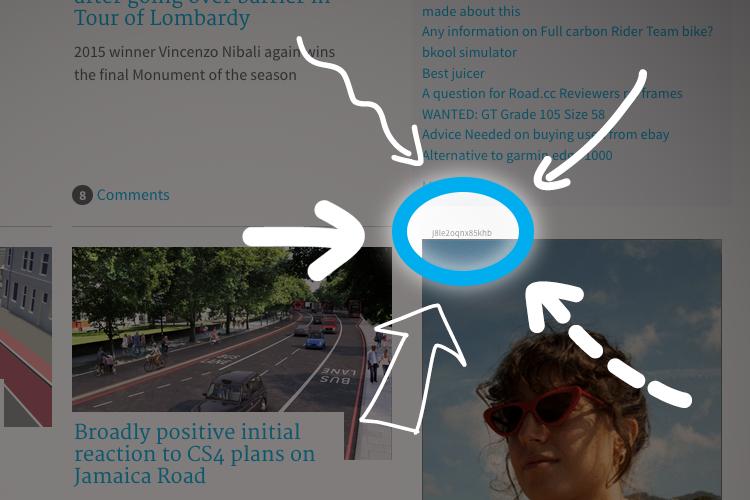 Bad ad update 2: It's all about the code

Another breakthrough in our war against irritating and annoying ads on road.cc
by Tony Farrelly

As you’ve probably gathered by now we’re on a mission to make your road.cc experience as pleasant as possible when it comes to the ads served on the site.

Annoying ads have never been a massive problem on the site, but they have been a persistent one - particularly for those of you using the site via a mobile phone.

In my last update I told you about some of the measures we’ve taken to try and eliminate these ads from the site - most notably:

With your help those measures have gone a long way to dramatically cutting the number of irritating ads that get through our defences.

Now we’ve added another weapon - a visible bit of code on every ad we serve that isn’t ours. You might have noticed it over the last few days, Or you might not: it’s designed to be fairly unobtrusive until you need it.

Each ad has its own unique identifier code and our ad network can use that code to block an annoying ad at source. Basically it’s the same bit of code you’d send us if you followed the steps suggested in our bad ad reporting page to ‘inspect element’, but just sticking it on the ad itself makes things a whole lot simpler for you when you come to report it, just take a screen grab and upload it to the bad ad page, you could even just tell us the code on there and it’d work too.

This also removes one of the problems some people have had trying to get the ad ID because their browsers don’t allow them to inspect the ad code or indeed any code - yes we’re looking at you Safari, and IoS. The latter being a particular pain because there seem to be phases where iPhones seem to be particularly prone to being served dodgy ads.

This should make the whole process of reporting annoying or irritating ads a lot easier - so take a bow Big Dave, our back end tinkerer in chief for coming up with the idea.

What we class as an annoying ad and how to help us stop them?

The latter two are the most insidious types of annoying ad we have to deal with, luckily they are rare - though many sites have similar problems with them.

So how can you help? Well with our Annoying and intrusive ad reporting page you can help us captures as much information about these ads as possible – screen grabs of the offending advert with the ad code would be a massive help. If you want to go old skool you can pull the ad code out of the ad itself; we’ve even got a handy video showing you how to get the code,  basically it involves right clicking on the ad, selecting 'Inspect element' and copying the highlighted code. It would also be useful if you could tell us the time zone you were in when you saw the ad and the time of day.

That code gives the ad network - who also want to deal with the problem – the necessary information to track down and block the sources of the offending ads.

Because of the way they work auto redirects are harder to deal with – a piece of code, which might be time limited, is injected into a seemingly innocuous ad which as it loads then deploys the redirect. The problem here being that because the redirect occurs before the page has loaded it’s hard/impossible to know which ad caused the problem. Even so, if you do find this happening to you it’s still worth you giving any information you can about what happened – obviously if by any chance the page did load before it redirected we’d love to know what was on it, but we’d also like to know where you were redirected too, and what if anything happened when you got there. We’d also like to know the browser and device you were using at the time.

As I’ve said before irritating ads make up a tiny fraction of the ads served on road.cc but that doesn’t stop them being irritating if you get one which is one of the two big reasons we’re putting so much effort in to our fight against bad ads. The other reason is that we believe that ads work and that they are the best method of funding road.cc anything else - in our view - starts to blur the line between advertising and editorial. So keep on reporting any irritating or intrusive ads and thanks again for all your help so far.