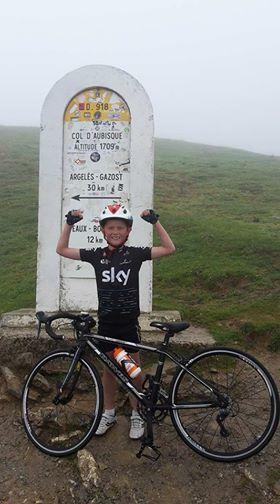 Thomas Denton, who turned eight in June, hopes to tackle the Hautacam, if the weather clears in time...
by Laura Laker

An eight year old has scaled two Hors catégorie mountain climbs, the Col du Tourmalet and the Col d’Aubisque, in two days, and hopes to tackle the Hautacam next.

On holiday with his family, Thomas Denton scaled the Tourmalet in 2’23” on Sunday with his father, apparently attacking and overtaking other riders on the way up. The pair scaled the Aubisque yesterday in cold, wet conditions but their attempt on the Hautacam has been halted by poor weather.

Thomas Denton, who turned eight in June and lives with his family in Scarborough, took on his first sportive aged just six. He was keen to tackle the three super category climbs after watching his heroes in the Tour de France.

His father, James Denton, told road.cc: “He has always loved watching the Tour de France, and we went along to watch it, when it came to the UK. He wanted to do his first sportive when he was six, which was about 50km, then he started riding 100km sportives when he was seven. He did the Heart of the Wolds and the Humber Bridge, this year, both of them 100km.

“Then he turned eight in June and we came up here.”

“He has got a very competitive nature – he has always got to be the best.

“He’s not just doing it, he’s doing it really well: he overtook people going up the Tourmalet, climbed it in 2’23”, which is reasonable, let alone for an eight year old.”

“He literally sprinted past some of the older gentlemen; he wanted to beat them to the top!”

Thomas said his favourite bit of the challenge so far is "pushing myself".

The hardest bit? “Probably descending off the Aubisque, says Thomas. "My hands were swollen because it was so cold, and I couldn’t really move them."

And the scariest: “Going down the Tourmalet at 43 miles an hour”. 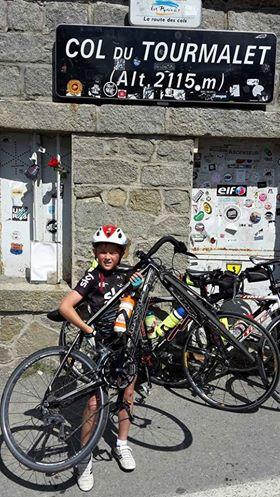 Thomas’ mum and younger brother have come along for the holiday, but they aren’t cycling up the big mountains. However, cycling is in the family’s blood.

“I have always, like Thomas, followed the Tour de France,” says James Denton. “My dad used to take us to follow the race when we were kids, and the old Tour of Britain, when it was sponsored by Kellogg’s.

“He’s even keener than me. I come down in the morning and he’s watching GCN, and watching Cav’s past sprints online. He’s always looking up new information and hints and tips on how to cycle better.”

Thomas, who is a member of Richardsons Cycle Club, hopes to attempt the local Hill Climb competition at the Scarborough Cycling Festival on 13th August.

James Denton said: “He has seen the pro’s going up Oliver’s Mount in the Tour de Yorkshire the year before last, Nicolas Roche and Thomas Voeckler, and he wants to do it.”

Denton is not the only youngster keen on tackling the giant mountains of cycling. Last month, at aged nine, Alfie Earl, who this became the youngest person to cycle from London to Paris this years, took on the Col du Galibier.