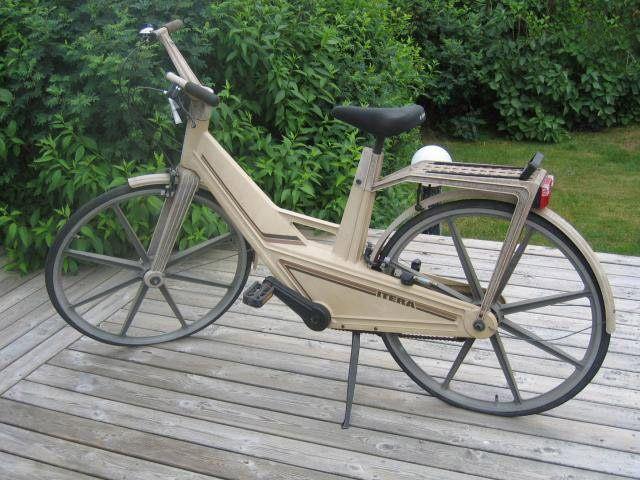 The Itera bicycle, stolen from the West Somerset museum, is known as a 'great failure of bike design' but has its place in cycling history...
by Laura Laker

A rare plastic bicycle, best known as one of cycle design’s great failures, has been rustled from a Somerset museum.

Thieves stole the Itera bicycle, along with other early plastic objects from the Bakelite Museum near Williton, in Somerset, on the evening of 21 July.

Although best known for its ugly frame, which manages to be both bendy and heavy, with components prone to breaking, the 1980s Itera, made by Volvo, nonetheless has an important place in the history of cycling and plastics, the Museum’s owner and founder says.

Patrick Cook, who founded the Bakelite Museum, and still runs it today, told road.cc: “They are well-known for being one of the greatest failures.

“In a way they are quite surreal because you get on them and they flex, like a rubber band, and the handlebars give way – they’ve actually snapped in some cases. The spokes break if you go over a pothole, and I think because they were sold in a kit frame, a lot of the kits were incomplete.

“We had three of them on show, one of them a racing bike, which is really just a nod to a road bike in that it has drop handlebars. It’s really ridiculously heavy. It was red but it has now faded to pink.

“I call it the Iterrible.”

Made by Volvo in the 1980s, an Itera features in Sweden’s Museum of Failure.

Mr Cook, who lives above the Bakelite Museum, believes the theft was opportunistic. He came downstairs after a windy night to find the bike, and a number of other objects, gone. He says there is a risk thieves will dump the bike in a river somewhere.

The museum is dedicated to early plastics and experimental design. As Cook puts it: “The whole idea of experimenting with plastics - a lot of it was trial and error.

However, the Itera was a throwback for its time, which Cook says gives it “an enormous place” in cycling history.

“If you think of the 1980s, a time when designer items were becoming so popular, this bike looks like a boneshaker – it looks retro in a bad way,” he says.

“They could have brought out a beautiful streamlined bike in sexy plastic but it looks like a bike from 1910 drawn by a child.”

Mr Cook bought the bike from an auction at Beaulieu National Motor Museum and it is now thought to be worth up to £300. He said the item attracted a lot of interest, particularly with visitors from Germany and Holland.

Among the unusual items at the museum are a Trabant car, which Cook describes as “the world’s dirtiest car – it is a two-stroke so it goes off in a blue cloud of smoke.”

He hopes to move the Museum to somewhere less isolated, ideally near Minehead, by the end of the year as it has been the target of a number of burglaries.