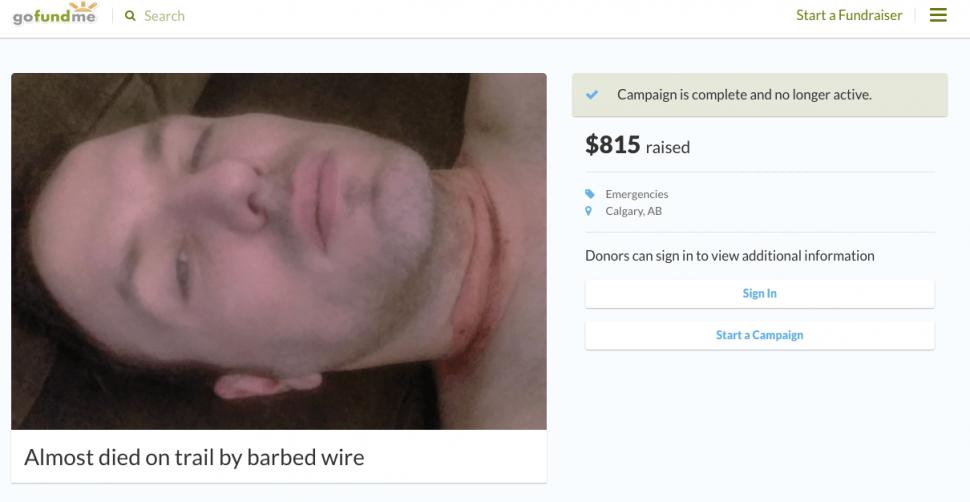 Stelianos Psaroudakis, 37, said he was garrotted while mountain biking
by Sarah Barth

A cyclist who pretended to have been injured by a barbed wire booby trap and asked for cash on a crowdfunding website has been charged with fraud and public mischief.

Stelianos Psaroudakis, 37, said he was garrotted while mountain biking on a trail near the hamlet of Bragg Creek west of Calgary.

He shared photos of a gash across his neck and said he left his bike behind on the trail after the fall and it was gone when a friend went back to get it.

GoFundMe says it has banned him after the fraud came to their attention via some public reports, including Psaroudakis’s acquaintances.

"As a result of all of the information that they provided us, we were able to determine that he had not hurt himself on the trail the way he claimed," police officer Curtis Peters told Huffington Post Canada.

"We found out that he had actually been involved in a collision with a barbed wire fence, but he was riding an ATV on private property of a friend nearby and that's how he got the injuries.

"It had nothing to do with the trail system or with mountain biking at all."

Psaroudakis turned himself and awaits a court date in a month’s time.

GoFundMe spokeswoman Rachel Hollis said all donors have been refunded. He's been banned from any future fundraising.

"Campaigns with misuse are very rare, making up less than one tenth of one per cent of all campaigns," she said in a statement.

"Along with a host of proactive measures to prevent misuse, we also have the ability to receive reports from users about potential fraudulent activity, as in this case.”

Earlier this year we reported how Merseyside Police were investigating an incident in which a cyclist was knocked off his bike after riding into some wire stretched across a promenade in Wallasey on the Wirral.

Officers were treating the incident, which happened on Egremont Promenade at around 9.20pm on the evening of Monday 13 March, as assault, with the victim sustaining cuts and bruises.

Local Community Inspector Paul Harrison said: “Thankfully on this occasion, the injuries the man suffered are superficial, but this could have been much worse. This was a completely reckless and dangerous thing to do and the victim has understandably been left distressed by what happened to him.”