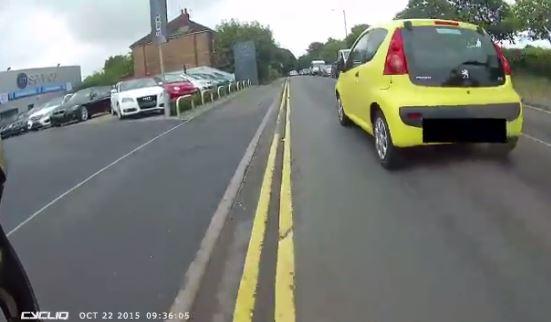 Near Miss of the Day 16: Police show how to overtake cyclists safely

As we reported yesterday, Dorset Police, along with their colleagues in Devon & Cornwall, launched their Operation Close Pass this week.

The forces are the latest to adopt the close pass initiative rolled out last year to widespread acclaim by West Midlands Police.

Plain clothes police officers take to the road on bikes, and radio ahead to uniformed colleagues when a driver gives insufficient space.

Footage is captured on bike-mounted video cameras supplied by Cycle Engage UK, and motorists caught in the operation are shown the safe distance to give riders with the help of close pass mats supplied by Cycling UK.

Today, Dorset Police have tweeted a video showing one motorist caught on camera giving too little room to the cyclist being overtaken, as well as another driver who overtakes safely, and the difference is clear to see.

How would you feel if you were the cyclist being overtaken so closely by the yellow Peugeot? #OpClosePass pic.twitter.com/SGMtT579qX

The first incident, involving a yellow car, has a datestamp of October 2015, so wasn't filmed as part of the current operation, but it's encouraging that the force is using social media to get the point across to motorists.

And here's an informative video from Surrey Police advising motorists how to overtake someone on a bike.

Over in London, the Metropolitan Police in Winchmore Hill have also been educating motorists via Twitter about how to drive safely when sharing the road with cyclists, tweeting this graphic.

An important reminder for motorists to remember when passing our fellow cyclists! #OpClosePass pic.twitter.com/9xLuPumgqE

If you’ve caught on camera a close encounter of the uncomfortable kind with another road user that you’d like to share with the wider cycling community please send it to us at info [at] road.cc or contact us via the road.cc Facebook page.

Subscribe
Near Miss of the Day
Dorset Police
close pass