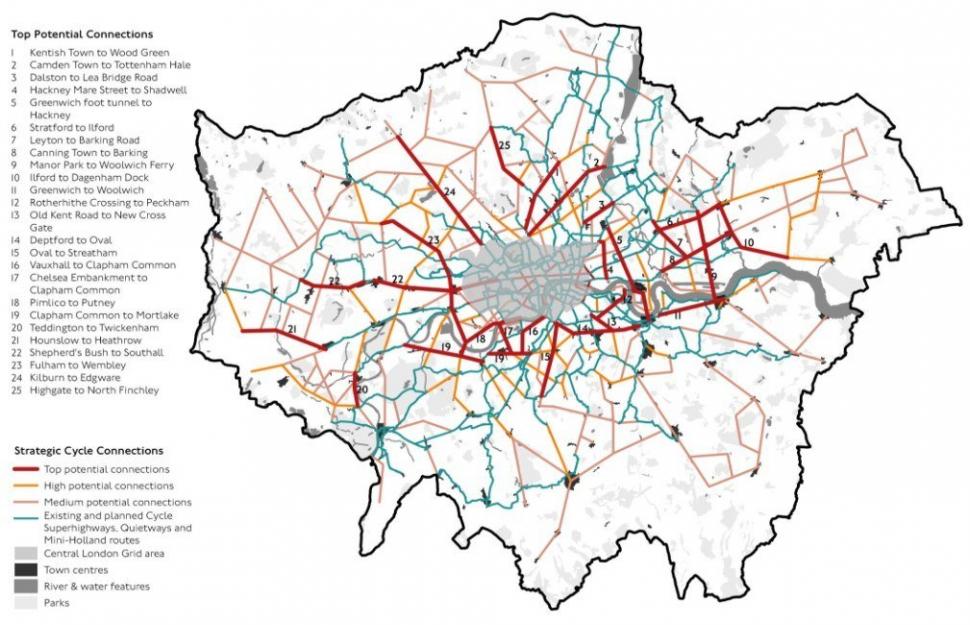 Transport for London identifies 25 corridors with greatest potential for cycling

London’s Walking and Cycling Commissioner, Will Norman, has named 25 corridors where new cycle infrastructure would have the greatest impact. The announcement follows data analysis carried out by Transport for London (TfL) with a view to identifying the areas with the greatest potential for cycling.

TfL says that the ongoing approach, which is based on growth forecasts, population growth, safety data and existing demand, is a new way to identify where to invest in schemes such as Cycle Superhighways, Quietways and Liveable Neighbourhoods.

The latest analysis also identifies where demand for cycling, walking and public transport coincide and so highlights where investment could improve all sustainable transport modes together.

Strava moves into 'big data' to find out where cyclists ride

Norman said: “We’re committed to improving cycling provision right across the capital as we work to make physical activity a bigger part of Londoners’ everyday lives. And while we are working hard to build new Cycle Superhighways and Quietways now, it’s also important that we look ahead to expand the cycling network and create the next generation of routes.

“That’s why we’ve using this ground-breaking analysis to identify the areas of greatest potential for cycling, and why we’ll be working closely with the boroughs to deliver schemes that help continue this spectacular growth in cycling for many years to come.”

TfL will now work with boroughs to conduct feasibility studies in these areas and develop cycling schemes.

The strategic cycling analysis also shows the growth in cycling along existing routes.

In total, more than half a million kilometres are ridden within central London on an average day, a rise of seven per cent in three years. Across London, 670,000 trips are made – the same number as on the Victoria line.

At the busiest spot on the network, at Temple on the East-West Cycle Superhighway, a total of 12,572 bikes were counted each day. Kennington Park on CS7 saw 11,155 cycles and Blackfriars Bridge on the North-South Cycle Superhighway saw 10,276. There were 16 other locations where more than 5,000 cycles a day were counted.

Ashok Sinha, CEO of London Cycling Campaign, said: “Cycling is taking off in London and TfL’s new figures prove that Londoners flock to high quality cycle lanes and routes where they’re built. By clearly showing where cycling potential is highest, this new analysis enables the Mayor to implement his promises to triple the extent of protected space for cycling, and make sure every borough can access Liveable Neighbourhood funding in the most effective way possible.

“Londoners will get a great return on this investment in the form of reduced congestion and pollution, cheaper travel, better public health, and more high quality public spaces.”