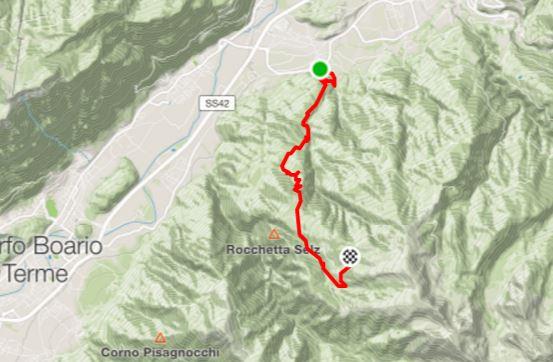 Is this the hardest road cycling climb in the world? (+ video)

The Pozza San Glisente in Lombardy is 10.2km long ... and has an average gradient of 18.1 per cent
by Simon_MacMichael

Could Italy’s Pozza San Glisente be the world’s toughest road climb? The people behind Twitter account La Flamme Rouge, who keep track of such things,  certainly think so – they’ve just given it that accolade.

We have a new #1 harder climb in the world and is in Italy: San Glisente Pozza from Esine. Coefficient: 3333.

Located in Lombardy, around 40 kilometres due north of Brescia, it’s 10.2 kilometres in length and has an average gradient of 18.1 per cent. Even just thinking about that makes our legs hurt, and that’s before you see the road surface.

And the surface of the climb is like THAT. pic.twitter.com/IldbmIphFy

There is a Strava segment, too – with the KOM currently standing at 3 hours 2 minutes and 41 seconds – though only one person seems to have attempted it.

> Struggling on the hills? If you need lower gears to make climbing easier, here's how to get them — and you don't need to spend a fortune to do it

The climb it knocked off the top spot? El Picacho de Galipán in Venezuela, which has an average gradient of 14.5 per cent over its 14.3 kilometre length … and as if that weren’t enough, most of its road surface is cobbled.

Surface of the climb is for the most part cobbled. pic.twitter.com/V3NrrbCNOq

Given the narrowness of the San Glisente Pozzo climb and the state of the road, not to mention a gradient that would see most of the peloton well outside the time limit, it’s not an ascent that would ever feature in the Giro d’Italia.

But La Flamme Rouge – who are the official race material providers to the Tour of the Alps and other UCI Continental races – say that this climb, the Stentaria in Friuli Venezia Giulia in the north east of the country, could one day figure.

The hardest climb in Italy that could really be in #Giro in the future is Stentaria. In 2011 there was some rumours and the road now is ok pic.twitter.com/hoymZ2GCro

Meanwhile, back to the Pozza San Glisente – if you want a good look at it, sit back and watch this two part video of the descent on a mountain bike.

For comparison, the Alto de l'Angliru in Asturias, Spain, which regularly features in the Vuelta, is generally considered to be one of - if not THE - toughest climb used in any of cycling's three Grand Tours.

It's 12.5 kilometres  long and with an average gradient of  just over 10 per cent, hitting 24 per cent in places.

With the second half of the climb averaging 13 per cent, it's hard work, even if your mum is giving you tips on how to tackle it.

> Video: "Bloody hell, Mum. Thanks." Cyclist reacts to parental "advice" as he tackles the Angliru