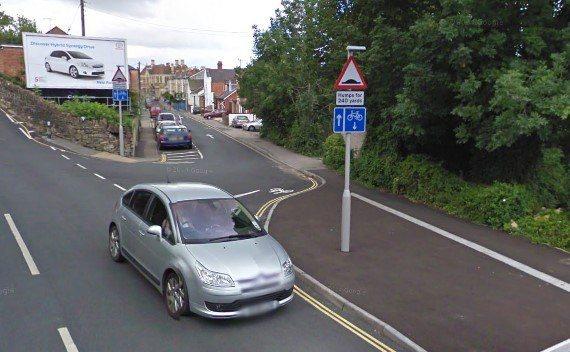 A Gloucestershire cyclist has claimed he was chased by a truck driver after taking a Stroud cycle lane up what is otherwise a one-way street.

Gloucestershire Live reports that drivers are often unaware that cyclists are permitted to ride both ways along Lansdown where cars are not.

The anonymous cyclist told the newspaper that when he used the lane towards oncoming traffic, an angry lorry driver drove at him and then chased him.

“It wasn’t a nice incident and I tried to tell him but the real issue is with the signs,” he said.

He added that the biggest problem was where drivers turn left off Brick Row onto Lansdown.

“The sign telling drivers they might see a cyclist coming towards them is high up on the left as they head down the hill, right next to it – but it’s out of their view.

“And then when they swing round, quite a few of them drive over the cycle lane as well. The signage just isn’t good enough.”

The lane is also narrow and alongside parked cars.

“The original plans for the cycle lane were agreed following consultation with local residents.

“We have made a number of improvements in the last year including installing extra signs, painting additional cycle symbols and other road markings. This came on the back of feedback from local people who use the route.

“We would encourage both motorists and cyclists to pay attention to the road markings, being aware of their surroundings and look out for one another.”

In 2015 we reported on another Stroud cycle lane. This one, painted between two bus stops, appears to be just eight feet long. However, the council explained that it was in fact part of a longer advisory cycle lane with legislation having prevented it being painted over the adjacent markings for buses.

1
Fears new cycleway will lead to drunkenness, drug taking and 'naked selfies in the woods' (no, really)
2
eBay seller refuses to accept bike auction offer – says "would be unhappy if I sold to Scouser"
3
Three Bora-Hansgrohe riders in hospital after driver crashes into training ride
4
Near Miss of the Day 520: Cyclist hit by driver's wing mirror coming under narrow bridge
5
Cycle to Work scheme bikes (temporarily) don't have to be used for commuting
6
Cyclist crushed after farm worker failed to secure straw bale to trailer, court told
7
Police investigating cyclist Tony Parsons' disappearance confirm his body has been found
8
Near Miss of the Day 521: Close pass ... by a police van (plus how it all went a bit Kafkaesque afterwards)