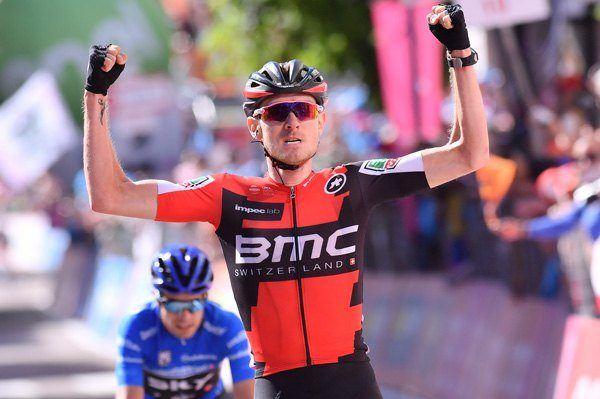 BMC Racing’s Tejay van Garderen, a rider who typically starts Grand Tours with a huge weight of expectation on his shoulders, has taken his first stage victory in a three-week race following a pulsating day’s racing in the Dolomites at the 100th Giro d’Italia. Sunweb’s Tom Dumoulin retains the overall lead after seeing off challenges from his closest rivals.

The 28-year-old van Garderen came around fellow breakaway member Mikel Landa to take the Stage 18 win in Ortisei/St Ulrich – the second time in three days the Team Sky rider has been beaten to the line after his defeat to Vincenzo Nibali on Tuesday’s Queen Stage.

Following his stage win, the American said: "It's been a couple of years and Grand Tours I've done for the General Classification but my body wasn't responding earlier in the Giro.

"I did my best to keep the morale. This is my first Grand Tour victory. It's an incredible feeling, especially in an area like this I'm so familiar with, having done many training camps here. I knew all the roads.

"I was not confident at all to beat Mikel Landa," he added. "He's a very good sprinter.”

Landa did extend his lead in the mountains classification, the prize Team Sky are now aiming for after the Basque rider and Geraint Thomas, who subsequently abandoned the race, saw their overall hopes end on the Blockhaus after a crash caused by a parked police motorbike.

Today’s stage had five big climbs resulting in a jagged, saw-toothed profile. Dumoulin’s unscheduled comfort break on Tuesday had seen him lose most of his lead.

But the onus was on Movistar’s Nairo Quintana – 31 seconds behind today – and defending champion Vincenzo Nibali of Bahrain-Merida – to attack, mindful that Sunday’s closing time trial from Monza to Milan will favour the Dutchman wearing the maglia rosa.

Quintana, who had team mates up the road, started his attacks early, with more than 50 kilometres remaining, his initial move followed by Nibali, but Dumoulin once again remained composed and bridged back across to him.

Subsequent attacks by the Colombian failed to break the race leader, who even went on the attack himself as the gradient eased in the final 5 kilometres.

Indeed, it was Dumoulin who led Quintana and Nibali across the line at the end of the 137 kilometre stage from Moena as he seeks to become the first rider from the Netherlands to win the Giro d’Italia.

By that time, other riders in the top 10 of the overall standings including fourth-placed Thibaut Pinot of FDJ had already crossed the line to close the gap on the riders currently occupying the podium positions.

Afterwards, the race leader said: “Nibali and Quintana were only focusing on me and trying to make me lose instead of trying to win. In the end, they lost some significant time to the other competitors.

"Riding like this, I hope they'll lose their podium spot. If this happens in Milan it would be very nice and I would be very happy.

"It would have been a dream scenario if Thibaut Pinot didn't take a minute on me. In the last climb I was feeling strong. So I decided to show them that I'm also awake.”

Today’s victory by the American BMC Racing rider means that stages have so far been won by cyclists of 12 different nationalities – unprecedented in the previous 99 editions of the race.