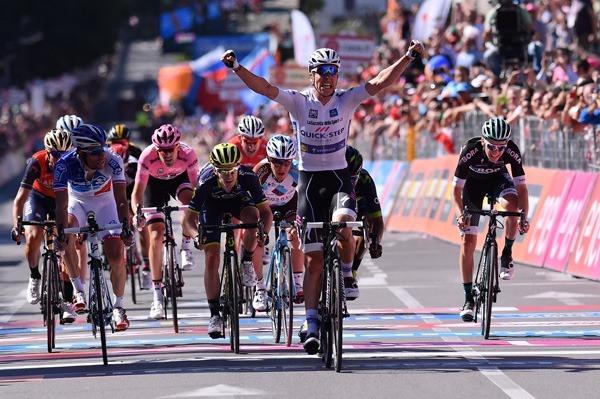 Bob Jungels of Quick Step Floors took his first ever Grand Tour stage victory at the Giro d’Italia this afternoon following a Stage 15 that started at breakneck speed and finished with the overall contenders battling for victory in Bergamo.

Race leader Tom Dumoulin was also in the group that fought for the win on a parcours with a finale that reflected the finish of autumn Monument, Il Lombardia, with two late climbs followed by the descent to the finish.

Today’s stage reflected the last realistic chance for most teams to rescue something from this year’s race, and the first two hours of the 199-kilometre stage from Valdengo were raced at an astonishing 52 kilometres an hour as attack after attack was brought back. The final average speed for the stage was above 46 kilometres an hour.

Eventually, a break did manage to stick, and it included Fernando Gaviria, wearer of the points jersey and winner of four stages so far.

While the break was doomed, his Quick Step Floors team continued what by any measure is a storming 100th Giro d’Italia to date as Jungels took the win.

The rider from Luxembourg had caught Cannondale’s Pierre Rolland, who had featured in a late break, as the stage headed towards its conclusion, and was joined by other overall contenders in contesting the win.

Afterwards Jungels, who had a stint in the overall lead earlier in the race, said: “It's not easy to realise but I'm super happy with this victory.

“I knew I had good legs today as I felt good in the climbs. I tried my luck in the final climb but it was a bit longer than I expected.

“In the downhill I was in a perfect position, on the wheel of [Domenico] Pozzovivo for sprinting.

“This is my first sprint victory. To do it at the Giro in front of these guys is wonderful.”

Earlier, maglia rosa Dumoulin had ensured the GC group slowed down after Quintana crashed as the stage headed towards a frantic finale, but Astana’s Tanil Kangert is out of the race after breaking an elbow when he came down.

Following the stage, he said: “It was a hard day at a very high average speed. There were a lot of breakaways but always some teams weren't happy with it. Eventually after 110 kilometres, a group went.

“Then it was a very hard finale with a lot of favourites attacking but we stayed calm and it was a good day for us.”