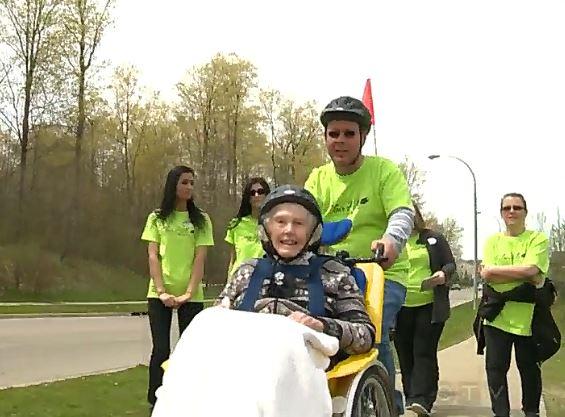 A woman in Canada has achieved her lifelong dream of taking a bike ride – at the sprightly age of 97.

Elta Lincoln, from Waterloo, Ontario, was given the surprise ride on an adapted trike at an event hosted by at Clair Hills Retirement Community, where she lives, reports CTV.

Orphaned at the age of seven and growing with the bare minimum – she never had a bike of her own as a child – she said afterwards: “It was fun.”

She attended the event to donate a bike to a child in need through Family and Children Services.

“Her wish was for a young child like her to have a bike, so they arranged for her to donate a bike to a child,” said her daughter, Marleen Durrell.

She teamed up with friends and staff from the home to arrange her mother’s first ever ride.

She said: “It's different from the bike she had in mind but at this age it's a safe bike!”

Deborah Barton, manager of community relations with Family and Children Services Waterloo Region, commented: “We love to come out and meet people like Elta. She's a shining star among us in the community for supporting children who need that little extra in their lives.”

Ms Lincoln’s ride was arranged under an initiative at Clair Hills Retirement Community called The Living List, which aims to provide 12 wishes to residents.

Kristen Lee, Executive Director of Clair Hills Retirement Community, explained: “The programme is that you're never too old or too young to learn something new and our hopes and dreams are alive at all stages of life.”

Among other dreams fulfilled by residents this year have been to go for an elephant ride, a helicopter flight and – we particularly like this one – a free bar night at the care home.