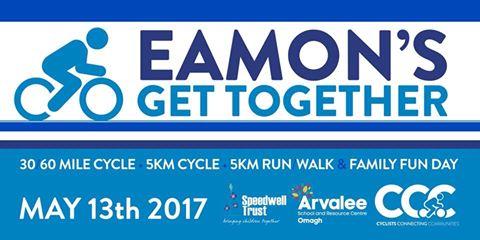 Eamon's Get Together in Omagh next month inspired by charity worker Eamon McClean who died last year...
by Simon_MacMichael

The cycling community in Northern Ireland will come together in a fortnight’s time for an event to commemorate Eamon McClean, who died last year at the age 50 and who devoted his life to bringing Catholic and Protestant schoolchildren together through cross-community projects.

Eamon’s Get Together on Saturday 13 May will be based at Arvalee School in Omagh, County Tyrone and is being organised by the educational charity, The Speedwell Trust, which McClean worked for before his death from heart failure last year.

The main theme of the day, with participants including members of cycling clubs, schools and families he was involved with is Cyclists Connecting Communities, with routes of 30 and 60 miles available and there will also be a 5-kilometre fun run.

There will also be family activities including bouncy castles, bubble football, an inflatable dartboard, soccer fun, science shows, art workshops, balloon makers and face painting, as well as live music and a drumming workshop, refreshments and a barbecue.

In an obituary following his death last year, The Irish Times recounted how in 1971 when McClean – one of 12 children – was aged six, his father, a teacher, was interned without trial and subjected to torture and sensory deprivation.

“Rather than become embittered, Eamon dedicated himself to help build a society where such things would not happen again,” the newspaper wrote.

“Through Speedwell, he brought several generations of Catholic and Protestant children together in educational and environmental projects – and sometimes their elders.

“He had the knack of bringing people together and finding the best in them,” it added.

McClean was a member of Omagh Wheelers Cycling Club, members of which joined riders from other clubs to provide a 100-strong guard of honour at his funeral last June.

You can find more information on Eamon’s Get Together, including how to enter, through the even’s Facebook page.