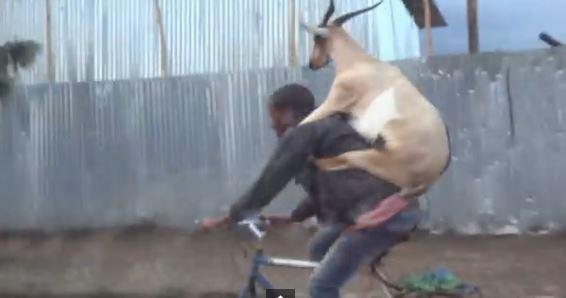 Videos: 13 of the weirdest things carried on bikes

After a man was recently spotted transporting a tumble dryer on his bike pedal, it occurred to us that everyone loves a video of a comically inappropriate load being carried on a bicycle. Here are 13 of our favourites.

The bike’s not being pushed along as some sort of makeshift wheelbarrow, as with the guy moving the tumbledryer. This is a guy actually cycling along with a fridge on his rear rack.

And if you don’t have a rear rack? Well then, just hoick the fridge onto your back.

At some point you have to ask yourself whether you’re the weird one for thinking it’s any way unusual to try and transport a fridge by bike.

A gas canister and a watermelon

Hard to know what to say about this one. Initially we thought that trackstanding with a gas canister on your head would be tough to beat, but then we discovered that this was no big deal because the same guy had also been riding around with a melon balanced on the gas canister for added instability.

The cat in question is called Semyon Semyonych, in case you were wondering – which you surely were.

Animals and fridges are clearly the main things people like to carry on their bikes.

A sack of spuds or summat

In truth, this one isn’t so much about what’s being carried as the effortless manner in which a Colombian farmer cracks a pair of triathletes on a climb.

We suppose that if your no-handed fully-laden cycling does result in a fall, at least you have a soft place to land.

Not entirely sure what. Possibly just empty polystyrene packaging. Slight suspicion of a third wheel providing a bit of balance somewhere in there, but it’s still an impressive effort.

Slightly less stuff, but definitely two wheels (even if he isn’t making much use of the pedals).

The entire contents of a person’s house, including the kitchen sink

A whole fleet of unusual loads in this one.

We couldn’t end with anything else.