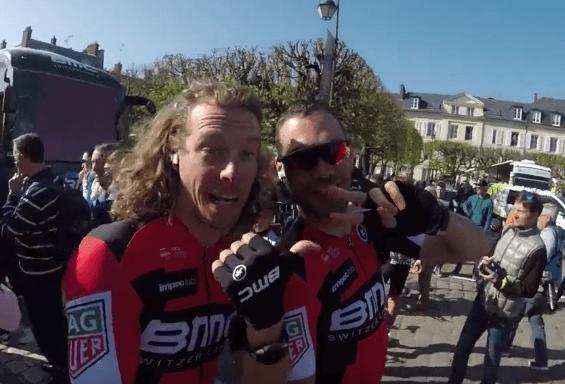 Our selection of some of the top footage from yesterday's big race...
by Simon_MacMichael

Paris-Roubaix always produces drama and spectacle, and yesterday’s 115th edition of the race, won by BMC Racing’s Greg van Avermaet, was no exception.

Here’s a round-up of some of the videos of a day when four-time winner Tom Boonen brought the curtain down on his career in what was his last ever race.

First up, here’s some inside-the-peloton footage from Velon – topped and tailed by van Avermaet and his BMC Racing team mate, Daniel Oss in confident mood before the race, and in a celebratory one afterwards.

Here’s the official highlights video … though someone had better tell the commentator that the Tour of Flanders was last week, not next Sunday, and that van Avermaet was second again.

Boonen's farewell, Sagan's lack of luck and Van Avermaet's domination : it's all there in the 3 minutes summary of this #ParisRoubaix ! pic.twitter.com/rYEwQrGZ0P

Orica-Scott’s Mat Hayman couldn’t repeat his success of 2016 … but at least he found a shower cubicle with his name on it.

Australia... This is your definition of A true Aussie champion ...Matty you are a Legend. Well played pic.twitter.com/vhi5KXkdUH

Here’s footage of perhaps the most spectacular crash yesterday, still with 150 kilometres to go. The spectator top-right with the yellow Flanders flag seems oblivious to the carnage unfolding behind them.

Énorme chute dans le peloton ! Naesen impliqué ! / Huge crash in the middle of the bunch ! Naesen is down ! #ParisRoubaix pic.twitter.com/Z6AZaPAr6Y

And finally … here’s a reminder of those wins down the years by Boonen, described by the commentator as he crosses the line to take his fourth victory in 2012 as “Monsieur Paris-Roubaix.”

He was certainly popular at the team bus in Compiegne before the start of the race.