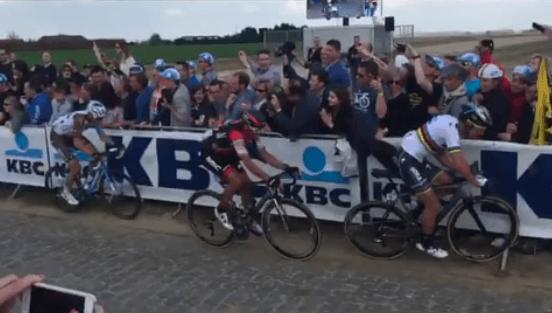 Video: Fan's jacket DID cause Peter Sagan's crash at Tour of Flanders

And to add insult to injury, Nike Terpstra rode over the world champion's sunglasses, destroying them...
by Simon_MacMichael

Ever since world champion Peter Sagan crashed out of contention at the Tour of Flanders yesterday, social media has been abuzz with the question of whether a fan’s jacket may have been responsible – and now, a video from the other side of the road shows that it was.

The Bora Hansgrohe rider, who won the race 12 months ago, was leading Greg van Avermaet of BMC Racing and AG2R-La Mondiale’s Oliver Naesen on the Oude Kwaremont climb when the crash happened.

The trio were in pursuit of Philippe Gilbert of Quick Step Floors, who had launched a solo attack with 55 kilometres remaining. He won the race, but there has been a lot of speculation that had it not been for the crash, he would have been caught.

The exact cause of the crash had been unclear, but footage shot by a spectator on the climb now shows exactly what happened – and has been retweeted by Sagan himself.

It clearly shows the jacket catching on his arm or jacket, enough to pull his front wheel into the foot of a barrier and crash, with van Avermaet and Naesen – whose handlebar pulled the garment clean off the barrier it was draped over – coming down too.

Video that shows my crash at the @RondeVlaanderen was caused by a jacket that caught my left arm. These things happen in races (@Seal_jobs) pic.twitter.com/ZcTorQaG6X

To add insult to injury for Sagan, in the aftermath of his chute, his sunglasses were destroyed as Nike Terpstra of Quick Step Floors ride over them – and if you’ve ever had a favourite pair of shades broken, you’ll know exactly how he feels in the second picture here.