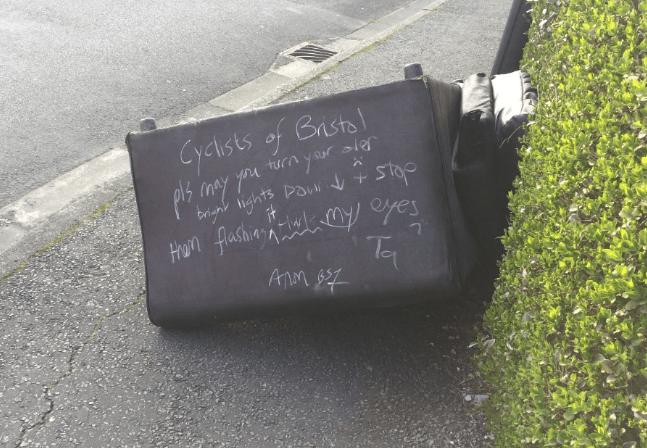 Some cyclists swear by them, others swear by a solid beam - where do you stand on the issue?
by Simon_MacMichael

Flashing front lights, like helmets, team kit or which groupset to use, is one of those subjects that polarises opinion among cyclists. Some swear by them, others insist you should only use a solid beam. But one Bristol resident – it’s not clear whether he or she rides a bike – is seriously agitated by them, and scrawled a message on an abandoned sofa to let the world know just how much.

The message, written on the underside of the sofa, reads “Cyclists of Bristol pls may you turn your over bright lights down + stop them flashing it hurts my eyes. Ta. Anon BS7” and was spotted by cyclist Steven Russell.

He told road.cc: “I found it odd, for obvious reasons … and luckily for the author there was a fly-tipped sofa lying around just when they needed one. Unless they brought it from home.

“But I saw it out of the corner of my eye and was the only cyclist to stop (at least in those 5 minutes) and actually read it.

“So I was bemused and pleased at the same time!”

Steven, it turns out, falls into the camp of cyclists who prefer to use a solid beam.

“I don’t actually use flashing lights, largely because I don’t like them on other cyclists coming towards me,” he explained.

“They’re not ideal for the darker segregated cycle lanes I use in North Bristol, where they can easily dazzle you.

“In truth, I don’t think they are ideal for road cycling either.

“Cars don’t have flashing headlights and, in striving where I can to inhabit the road much as a car would (taking the lane, signalling, obeying traffic lights etc., for the safety of all), I won’t use flashing lights either,” he added.

We know plenty of cyclists who feel the same, but equally many others will always have their light in flashing mode, and pretty much most front lights we see nowadays have at least one of those.

Some switch between the two – for instance, a flashing light can be particularly useful when riding down a country lane at dusk and can warn drivers behind you of your presence due to the pulsing reflection of the beam off road signs.

Where many cyclists find them especially annoying is not when they are used on the public highway, but on separate cycling infrastructure – it’s easy to have your vision temporarily wrecked by a flashing light coming towards you.

One solution is to angle the light slightly downwards so they aren’t shining straight at people – but that gives rise to perhaps one of the biggest problems some people find with them.

That’s where the light comes with a basic O-ring mount, making the light liable to tilt up or down when you hit a bump on the road – and a surprisingly large number of even mid-to-high-end lights have exactly those mounts, something for brands asking what can be considerable sums for their products to address, perhaps?

Where do you stand on the issue? Let us know in the comments below.