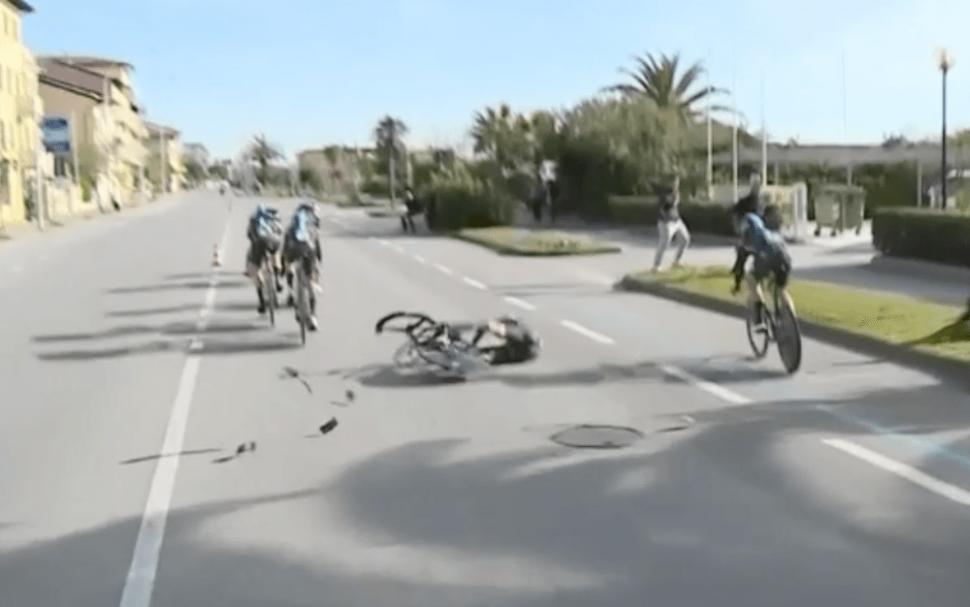 The broken wheels affected 3 Team Sky riders, but Gianni Moscon was the worst affected, with his front tri-spoke wheel completely disintergrating and causing him to crash quite heavily.

According to Geraint Thomas, Diego Rosa's wheel also broke, as did another rider's. The failures seem to have been caused by a pothole which was hit at high speed prior to the video footage. BMC, also riding the PRO tri-spoke wheel suffered no such problems, so the failures seem to be isolated.

The video footage above shows Moscon's crash. It's not clear whether the tubular tyre was flat before the crash, nor if it rolled off the rim before or durning the wheel's collapse.

Sky mechanics can then be seen collecting pieces of rim, which they then analysed with representatives from Shimano after the race.

The pros and cons of carbon wheels

"PRO is continuing its investigation into the issue we saw with Team Sky at the team time trial of Tirreno-Adriatico. We are continuing to look closely into all factors that could cause the incident.

In the meantime we wish Gianni Moscon the best of luck in the remaining stages of Tirreno-Adriatico."

Thomas, and his Sky teammates lost 1minute 42seconds to winners BMC, so they will likely turn their attention to stage wins.

1
Round-the-world cyclist arrives in UK... and has bike stolen outside a Reading Wetherspoons two days later
2
Charlie Tanfield struck by motorist in “intentional” hit and run
3
Could a new electronic groupset be coming soon? Plus new stuff from Look, Canyon, MAAP, Smith, and loads more
4
Bike lane meltdown: New road markings prompt Mail to ask, “is there any room left for cars?”
5
“What is the matter with people?!” Chris Hall’s supplies stolen* during mammoth seven Everestings in seven days charity challenge
6
Check out Canyon’s 2022 Aeroad road bike lineup
7
Has Zwift had its day? Plus RideLondon's U-turn on THAT 22mph speed limit on the road.cc Podcast
8
Bus driver pleads guilty to careless driving after cyclist pushed into hedge