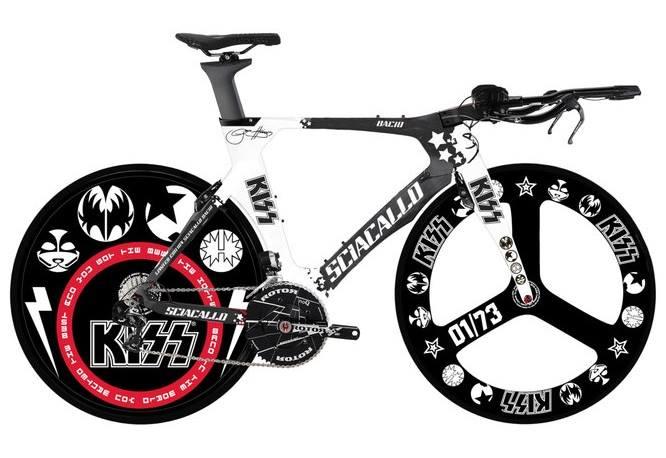 Filthy lucre ain't nothing new - but there's still cash in brand licensing, it seems...
by Simon_MacMichael

It’s the answer to the dreams of fans of legendary heavy rockers Kiss who also participate in triathlons - an officially licensed bike that combines their favourite sport with their favourite brand.

It comes from Vancouver, British Columbia-based Sciacallo bikes, which launched a bike and wheels collection licensed by the four-decades-on-and-still-going-strong group last month.

Products include this rather striking rear disc that showcases the members of the band in their iconic make-up.

Sciacallo makes much of its Italian heritage on its website - so it’s no coincidence that the Kiss-themed bike has been given the model name, Bacio.

With 125 licensing partners around the globe - covering everything from comic books to credit cards via waffle makers - Kiss are the rock equivalent of a certain fashion designer who was the patron of brand extension, as discussed in the 1991 book by Richard Morais Pierre Cardin - The Man Who Became A Label.

The agency that handles the band’s worldwide licensing and merchandising, Epic Rights, published a joint statement from group co-founders Gene Simmons and Paul Simmons in which they extolled the virtues of filthy lucre - although clearly this is far from cash from chaos, but rather, a well-oiled marketing operation.

"We have always believed that to be successful, in life and in music, you've got to keep moving forward,” said Stanley and Simmons.

“No one wins standing still and we have always refused to live within the limitations of others. Our decades of record-breaking merchandising success is rooted in our motivation to give our fans what they want.”

And to make them cough up their hard-earned cash, too, we suspect.