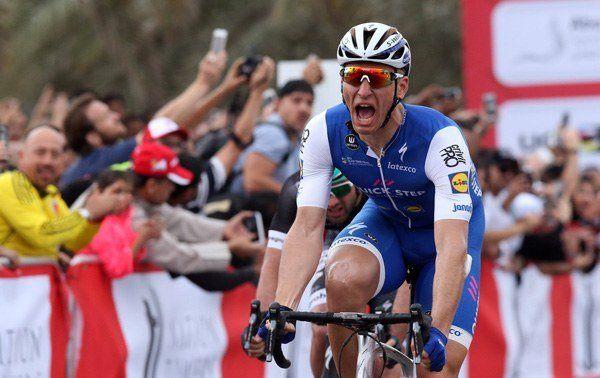 German sprinter changes bike “out of respect for colleagues,” pips Caleb Ewan to line; Mark Cavendish gets insight into how his own sprint rivals feel
by Simon_MacMichael

Marcel Kittel switched bikes at the Abu Dhabi Tour today “out of respect” for his fellow competitors in the wake of claims by Team Sky’s Owain Doull yesterday that the rotor on the Quick Step Floors rider’s bike had "cut through" his shoe "like a knife" – and the day ended happily for the German rider as he won the sprint thanks to a premature celebration by Orica-Scott’s Caleb Ewan.

On yesterday’s opening stage of the four-day race, Kittel, Doull and Ewan were among the riders who crashed with a kilometre to go, and the Team Sky man was unequivocal in his belief that it had been the disc brake rotor that had damaged his shoe.

“My shoe’s cut to pieces, that’s definitely brakes that did that,” he said. “It’s gone straight through my shoe into my foot," and that it was "lucky it is not my leg.”

Doull continued: "It’s like a knife, you know. Just cut straight through that.”

He added: “They’re pretty lethal to be honest. I’ve come off lucky.”

But overhead footage of the crash suggested there was no contact between Doull and Kittel’s bike, with the sharp edge of the protruding foot of a crash barrier put forward as one theory explaining how his shoe had come to be slashed.

Kittel chose not to ride with disc brakes today, but certainly gave no hint in the post-stage press conference that he shared the Team Sky rider’s opinion regarding yesterday’s crash.

“For me the decision to not ride disc brakes was also out of respect for colleagues,” he said.

“There was a bit of discussion about Owain Doull’s crash and injury being caused by the discs last night and I chose not to put oil on the fire.

“I’m still convinced that disc brake tech has a future in the sport but there’s still work to be done,” added Kittel.

“A cage around the disc would relieve the worry of the other riders. I’m also not in favour of not everyone having the same equipment,” he concluded.

In today's second stage Ewan, who believed he had taken the win as he started celebrating early was pipped to the line when Kittel deployed a classic sprinter’s throw.

“I haven’t seen how close it really was but I think the celebration is what cost me the stage today, which is pretty embarrassing,” he reflected.

“I also feel sorry for my team-mates. They did an awesome job and for me to stuff it up like that is a massive letdown to them as well.”

Kittel said: “I haven’t seen the video but I guess Caleb was just beaten on the line and when you don’t carry on sprinting until the line comes that definitely helps your opponent, in this case me. It’s one of those mistakes that every sprinter has made.”

Mark Cavendish of Dimension Data retains the race lead after finishing third today. Not the tallest sprinter – at 5 foot 9 inches, he cedes about six inches in height to Kittel – he does stand four inches taller than Ewan.

Today therefore gave the former road world champion an insight into how some of his own, bigger rivals must feel when he launches his sprint with his characteristically low body position, as he explained afterwards.

“Today in all honesty Caleb was the strongest, riding into a block headwind. I couldn’t match him. I knew with a kilometre to go I was too far forward because in a headwind you need to be in the wheels.

“With Marcel’s strength he’s always going to come 5kmh faster, with his power. I went to pass Caleb but couldn’t do it.”

He added: “I’ve never sprinted off Caleb before and it’s the first time I’ve understood how hard it is to come off a small rider. There’s no difference between being on the wheel and in the wind.”