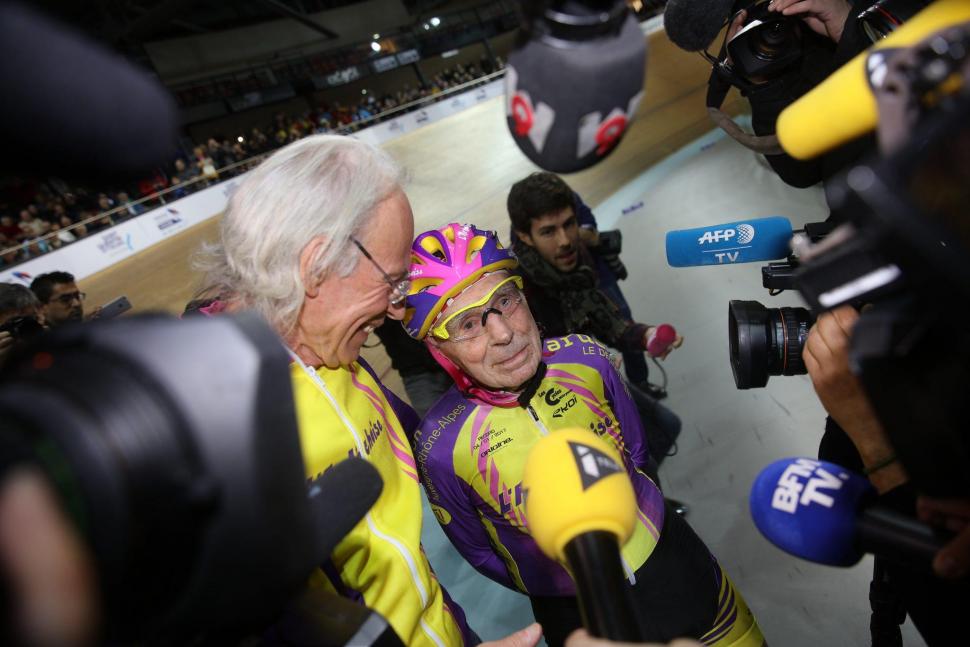 Robert Marchand after breaking his record at 105 - image via Conseil départemental des Yvelines on Flickr.jpg

The World Record breaking pensioner cyclist needs a new pair of €6000 hearing aids, but can only afford one.
by Elliot Johnston

Hundreds of Euros were collected on the first day of a fundraising drive for 105-year old record breaker and cycling inspiration Robert Marchand, who cannot afford to buy a new pair of hearing aids. Mr Marchand is said to have been in tears upon discovery of the generosity.

The Frenchman became the first cyclist to set a record in the UCI's specially created category for Masters aged 105 and over on January 4. However, following the completion of his record he told friend and president of L'Ardéchoise cycle race, Gérard Mistler, that he needed two new hearing aids but could only afford one.

Mr Mistler, who founded the L'Ardechoise cyclosportive in 1992 and has been running it ever since, turned to over 70,000 cyclists in his extensive network for help.

He explained to Le Parisien newspaper that Mr Marchand gets by on a very modest €900 and cannot afford the high costs of effective hearing aids.

"Robert modestly manages his retirement of less than 900 EUR after working until 86 years," Mistler said. "When he said to me after beating his last record that he could only pay for one of the hearing aids he needs, I decided to appeal to the participants of L'Ardéchoise's goodwill, as well as the volunteers."

The following day it was reported in Le Dauphine newspaper that 800 was raised on the first day, which Mr Mistler called "a very touching, this mobilization."

He added: "It put Robert Marchand in tears when he learned what was happening."

The town council in Mitry-Mory, where Robert Marchand lives appeared to be somewhat deterred by the claims that the record breaking cyclists couldn't afford hearing aids and was therefore going without.

Laurent Prugneau, a candidate in the town's municipality elections in 2014 asked the question "how did the municipality not take the initiative to offer him such equipment?"

To which the town mayor replied: "If Robert had needed a hearing aid, of course that the city would have taken the cost to bear." Later suggesting that Mr Marchand had rejected auditory prosthetics in the past, saying that they didn't work well for him.

However, Mr Mistler, the man Marchand has charged with helping him in his search for an acceptable solution to his hearing problem has said that since he tried prosthetics a few years ago, he has "found some that suited him."