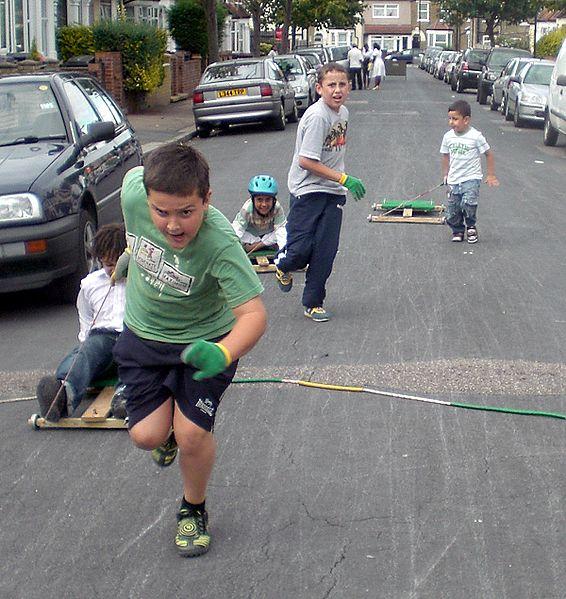 Sustrans calls for safer streets for kids to play on

Sustainable transport charity Sustrans has called for streets to be made safer for children to play on rather than given over to traffic, telling transport planners that “Britain’s streets need to be places for people to live in rather than drive through.”

The Bristol-based charity made its appeal after the publication of a five-year study on child casualties on the road that showed that children in poorer parts of Britain are exposed to a much higher risk of becoming victims of road accidents than those in more affluent areas.

The study, conducted by Road Safety Analysis, analysed 120,000 children who had been victims of road traffic accidents between 2004 and 2008, equivalent to one in every 427 children being killed or injured in a road accident each year.

But researchers found huge discrepancies after they analysed results by the victims’ postcodes, which were divided between 408 separate local authority areas, with children in the most risky area, Preston, nearly five times as likely to be killed or seriously injured in a road accident as those in the safest one, the Royal Borough of Kensington and Chelsea.

In the Lancashire city, a staggering one child in every 206 is a victim of a road accident each year, compared to one in 1,158 in the affluent Central London borough. It is a pattern reflected throughout the rankings, which you can find here; the top of the list is dominated by often post-industrial towns and cities in the North of England, while the bottom features a number of Inner and South West London local authorities whose streets include some of Britain’s most expensive real estate.

Sustrans is urging that the nation’s transport policies now be reprioritised to ensure that “streets across the country become safer places for children to play out in, walk in and cycle around.” The charity suggest that “a people-friendly, safer street would have a 20mph speed limit and be redesigned in low-cost ways that encourage drivers to travel more slowly and be more aware of their surroundings.”

Alex Allen, who is Sustrans’ expert in redesigning streets, said: “We know that the more people cycle the safer it becomes, so the answer is not to scare people into their cars but to encourage people out of them.”

He continued: “This is particularly true of children, who need to play outdoors, walk and cycle when they are young so that they take these healthier habits with them into adulthood. After all, the long-term health problems caused by inactivity far outweigh the risk of walking down the street.”

The charity says that it has worked with residents in a number of areas of the country to help implement initiatives designed to reduce traffic speeds in residential streets, such as strategic planting of trees that it says can help slow traffic speeds by up to 8mph. In such areas, it said, whereas “only 9 per cent of residents felt their street was safe for children to play before the redesigns, 36 per cent were happy to let children play out after.”

Mr Allen added: “Too many residential areas are clogged by traffic when they could be safe public spaces where children can play safely outside their front doors and travel independently. It urgently needs to change.”

Concern over the dangers streets pose to children, particularly in urban areas, are nothing new of course. According to an information sheet published by the charity London Play on London’s Play Streets, which have now all but disappeared having largely been phased out in the 1970s and 1980s, almost a century ago The New York Times reported calls for streets to be made safer for children to play on.

That New York Times article was published in 1909, when motor vehicles were in their infancy of course and much traffic remained horse-drawn, but five years later, the newspaper repeated its point, saying, “children must play, and children, if they live in the cities, must play in the streets.”

The result was the Play Streets initiative, which closed a number of city blocks to traffic in afternoons during the summer, with activities co-ordinated by the Police Athletics League.

By the 1930s, the idea had caught on here, and in 1938 the Streets Playgrounds Act allowed some councils to designate certain streets as Play Streets, albeit without the structured supervision seen across the Atlantic. By the mid-1960s, there were said to be 750 such streets in England and Wales, although over the ensuing decades their numbers dropped dramatically, partly as a result of drivers ignoring signs and parking their cars there.