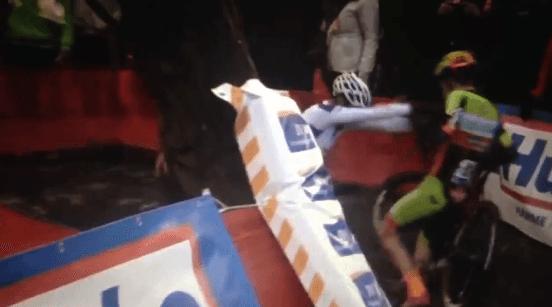 TV cameras capture the pushing and shoving at Sunday's Flandriencross in Hamme...
by Simon_MacMichael

Two riders in a top cyclo-cross race in Belgium on Sunday were disqualified after tempers flared between them, with the incident caught by TV cameras.

The unseemly set-to at the Flandriencross in Hamme took place between Vincent Baestaens of Beobank-Corendon and Crelan-Vastgoedservice rider Jens Adams, reports Sporza.

The pair had already clashed on one corner, Adams hitting the deck as Baestaens tried to overtake him.

Metres later, on the next corner, both riders came down – and some pushing and shoving followed, with Adams sent into the barriers by an irate Baestaens, the rider in the white, who apparently thought that his rival had aimed an elbow at him.

Baestens apologised afterwards, saying: “My reaction was wrong, I let myself get carried away in the heat of battle."

Adams said: “I made an arm movement, wanting to urge Vincent to ride more calmly. Unfortunately, both Vincent and the jury saw it differently.”

He added: “I am absolutely not by nature an aggressive rider and I tried to keep calm after I was pushed to the ground.

“However annoying it is, I’d like to close this matter on a positive note.

“Vincent, let’s draw a line under it and move onto next week – then we’ll fight each other fairly.”

The race was won by Baestaen’s team mate, the Dutch former world champion, Mathieu van der Poel – whose Strava ride we featured last week after he rode more than 200km home to Antwerp from the cancelled World Cup race at Koksijde.