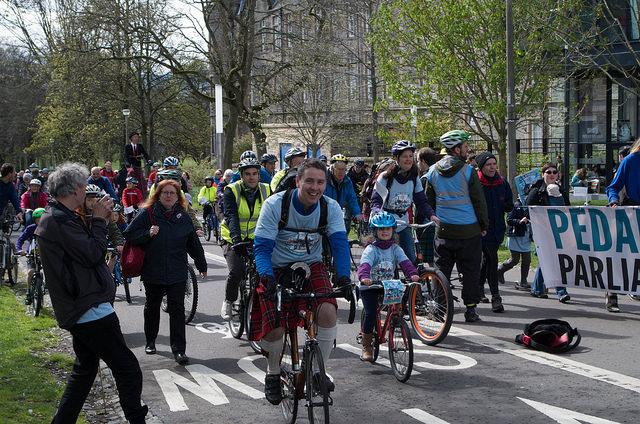 A helmet cam cycle campaigner has become the victim of a hate campaign, with an angry party threatening to poison neighbourhood pets in revenge for his videos of poor driving.

David Brennan, a keen cyclist and Pedal on Parliament founder, who was knocked down last week as he rode, regularly posts footage to the internet of dangerous driving and motorists on their phones.

But one individual or group has threated his neighbours in an anonymous letter, saying they will become the targets of "random acts of malicious encounters" unless they shun him.

David told the Daily Record: "I have been wearing a helmet camera since 2007 as I didn't feel safe on the roads.

"Over time I've had to report some dangerous drivers but far from 'chasing drivers' all I am doing is trying to get to work.

"Being threatened is not going to change what I do. Debate is good and people disagreeing with me is fine.

"People threatening me and my neighbours is taking it too far."

Police are investigating the offence after being alerted by a neighbour.

David added: "I'm trying to encourage the government to invest in better infrastructure and to design safe cycle ways for families and children so that cycling becomes an alternative option for people.

He added: "Drivers forget that we all have to share the roads. They see a cycle way going in and they think that the balance is being unfairly weighted but the reality is that it has been so easy to drive for so long they don't see how skewed the balance really is."

Back in 2015 we reported how Mr Brennan had drawing pins sprinkled on his driveway in what he believes was a deliberate act, and one he describes as “pretty sinister”.

Brennan, who posts videos to YouTube under the user name Magnatom, discovered the drawing pins after he punctured when leaving home to ride to work.

Police officers visited him at his home in Glasgow to discuss the incident but have said there is little they can do other than record the incident and increase patrols in the area.

Brennan told road.cc:  “I set off for work as normal. I jump on my bike on my path, and cross the main path (legal thing to do from your own home I might add!) to start cycling on the road.

“I quickly notice a clicking noise. It sounded like something stuck in the front tyre. I stop and have a look, and there is nothing there. I have a look at the rear tyre and I see a drawing pin.

“Reluctantly I pull it out and I hear the hiss of air. I cycle gingerly back to the house. I go back as I can use the track pump to re-inflate. Back on the path I start looking at the tyre.

He continued: “Effectively I've been deliberately targeted. Yes, I can repair the tyre fairly quickly, and drawing pins on the ground are something that happens from time to time, but not right at the end of your path.

“In fact I seriously think this was in relation to what I do either through the helmet camming or campaigning.”