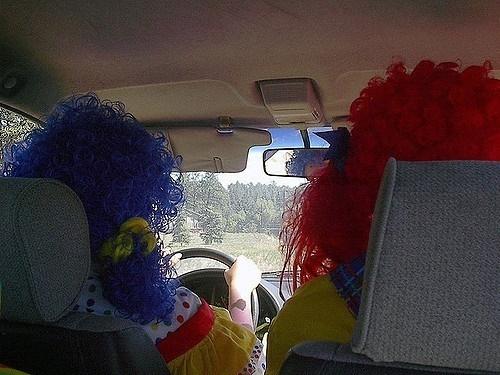 A cyclist has been chased through The University of Kent's Canterbury campus by a pack (technically, a ‘pratfall’) of clowns in one of the latest examples of the ‘killer clown’ craze. The clowns involved were travelling in their traditional mode of transport, the Ford Fiesta.

The United States has been experiencing a growing trend of individuals dressing up as clowns to deliberately scare people and the practice has recently spread to Britain. The BBC yesterday reported that Thames Valley Police alone were called to 14 such incidents on Sunday.

Zeph Fenn told Kent Live that he was chased by the car at around 10pm on the same day. He first spotted the car while cycling through St Dunstans when the clowns started shouting abuse at him.

He said that four were wearing plain masks while another was wearing a clown mask. “They looked like they were around 18-24 years old.”

After riding on to The Venue on the campus, Fenn saw the clowns parked up at a cash machine. “Some of them were in the car, some of them were blocking my path as I was cycling. I came by and tried to smash their door on my bike and shouted at them."

The car then followed him. Doubtless anticipating that a far larger number of clowns would exit the vehicle than would seem physically possible, Fenn rode on.

"When I was reporting it all to campus security I was really out of breathe and just anxious and full of adrenaline," he said, adding that while he was speaking to them he also heard them receive an 'emergency call' from a screaming group of girls reporting the same incident.

He said: "I believe these boys are pranksters, not killer clowns. Although it is a similar trend. And I feel this culture of fear gives them a buzz which could provoke further incidents."

A spokesperson for Kent Police said: "Kent Police received a report of concern at 10.45pm on Sunday October 9 that a car containing a number of people in clown masks was seen to be driving in an anti-social manner along St Dunstan's and on the University of Kent campus in Canterbury. Officers spoke to witnesses and enquiries are ongoing."

ITV reports that a man dressed as a clown jumped out on a cyclist riding north along the national cycle route to Golden Jubilee Way, Eastbourne, on October 5. The person emerged from a bush holding what was believed to be an offensive weapon, but didn’t speak or make any attempt to harm the cyclist.

Have you been chased by a creepy clown? Let us know in the comments below.