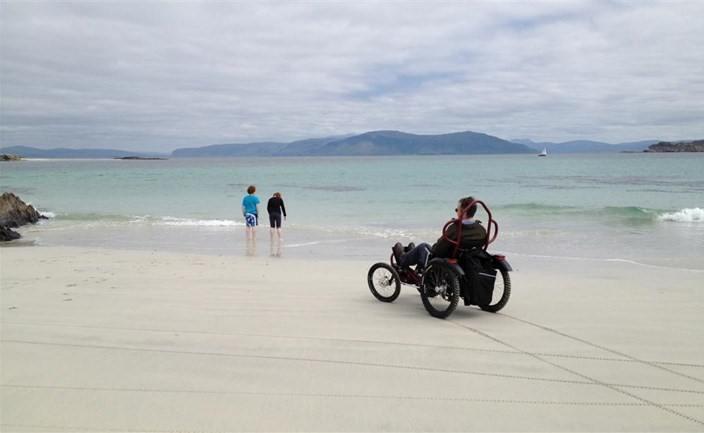 Diagnosed with motor neurone disease in 2010, Calum Ferguson has made an incredible recovery and has already raised £110k for charity
by Elliot Johnston

Father-of-three Calum Ferguson who suffers from motor neurone disease (MND) and has cycled over 5000km on a modified rehab bike, has just reached his target of raising £100,000 for charity.

Mr Ferguson was diagnosed with the nerve degeneration and muscle wasting disease in 2010, but battled to an amazing recovery through "good care, equipment, and physiotherapy."

The 52-year old set out on his journey towards fundraising £100,000 for MND charity MND Scotland as well as raising awareness for the disease back in 2014.

It was then that Mr Ferguson started using his recumbent rehab cycling machine, which he aquired because access to conventional rehabilitation options were limited in his area. Since then he has racked up in excess of 5000km on the machine.

It was in March 2010 that 46-year old Calum Ferguson was diagnosed with MND, a piece of news he describes as "devastating."

Though, in the story section of his Just Giving page - which is still accepting donations - Mr Ferguson explains that he decided from the outset that he wasn't going to give in easily.

He writes about how he kept working for two years after the diagnosis. He goes on to talk about how he became wheelchair bound in March 2012, fell seriously ill in autumn 2012 before being transferred to a local hospice just before Christmas, and being given 6 weeks to live over Christmas.

The Dunblane man's incredible recovery can be put down to a number of things, but he highlights his access to the rehab bike as a platform which allowed him to "reach back out into the world" as well as to fund raise and increase MND awareness.

"Rehab equipment and physiotherapy isn't available in my area for MND patients," the 52-year old writes. "So I hired a rehab cycling machine and have been using it since December 2014, hence the logic behind this effort.

"During the last year and a half, due to everyone's support I've been able to reach back out into the world and launch my MND Campaign, which has so far raised over £100,000 and has increased MND Awareness through the many articles which have been published."

In order to give those contributing to his cause even more insight into what it's like to live with MND Mr Ferguson launched a YouTube channel. The most recent video explores the positive impact ventilation has on those suffering from MND. You can watch it below:

As for the future Mr Ferguson is optimistic. He told Scottish television network STV that he intends to carry on doing what he has been since 2010; defying odds.

"In terms of the future, I plan to keep campaigning for as long as I can and show that no matter how disabled folks may be, society should never write us off, as we can still achieve great things."