​Ritchey used Eurobike to unveil its brand new Outback, a steel-framed adventure and gravel bike that slots between the SwissCross cyclocross race bike and Ascent touring bike in terms of geometry and purpose. It’s a totally new bike and has a frame made from heat treated Logic steel tubing, and has been one year in development. Tom Ritchey still owns the company and is very much involved in the product development and direction of the what the brand offers, and it's only when he's happy with the final product that it gets put into production. The geometry suggests a bike designed to be fast and stable on a variety of surfaces, with a bottom bracket that is lower than a cyclocross bike - the BB drop is 70mm. The frame is offered in five sizes from 49 to 59cm. It has 12mm thru-axles are used at both ends and it has opted for post mount for attaching the disc calipers to the frame and fork. If you’ve heard road.cc editor Tony’s woes about flat mount disc brakes then the decision to use the more easily adjustable post mount doesn’t seem such a bad decision. The brand new carbon fork is very rare in that it has a straight 1 1/8in steerer, the skinniness of the head tube really stands out in the modern era of tapered and oversized head tubes.  Tyre clearance is about 38 to 40mm, depending on rim and tyre brands and combinations. You’ll notice a lack of mudguard and rack mounts, and there’s very much deliberate - it’s intended as a fast performance alternative to the Ascent, which does come with all the mounts you need for adoring the frame with mudguards and panniers. All cables are routed externally. 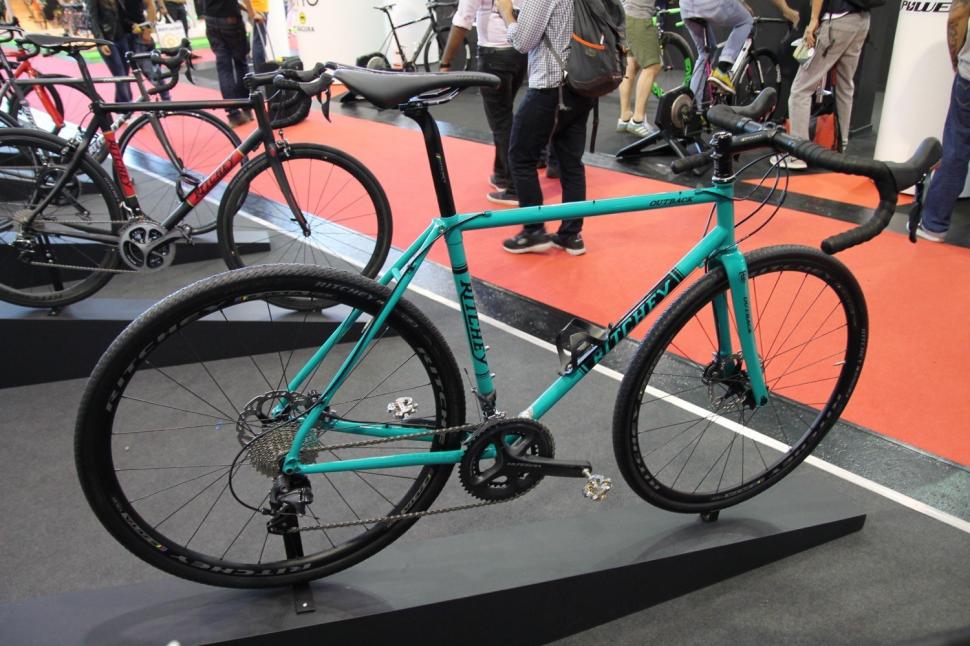 The pictured bike is still a final development model, in fact, it was finished and painted only days before the show. Final production bikes should be available in early 2017 and it’s only offering this complete bike, with Ultegra and WCS equipment, for £3,000 - we’ll confirm prices and spec details once we get back to the UK. The other big news from Ritchey is that it’s going to start selling complete bikes. It’s in the process of establishing a network of about 10 dealers around the UK from where it will offer a range of five complete bikes.

The bike here is wearing Ritchey’s new Alpine JB gravel tyre, which will be available in widths from 28 to 35mm.