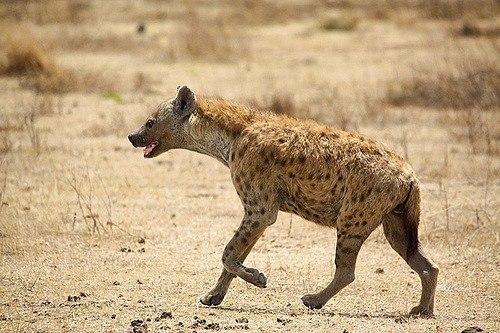 A man who says he saw a hyena while out on a bike ride near Bristol has recruited fellow cyclists to try and track down and photograph the animal after the authorities said they needed more evidence before he could take action.

Stuart Price took to Facebook earlier this week after spotting the animal while he was cycling on Tuesday evening with his friend Ashley Cripps through the Gordano Valley Nature Reserve between Portishead, where he lives, and Clevedon.

Posting to the Everything Portishead group, he said: “So out on the bike going straight through the Gordano Valley this evening. Was lovely.

“People are going to laugh at this but I heard it and saw it - there is a Hyena in the valley.

“They may be more than one. Not sure how it got there, but some joker has let it loose.”

He told the Bristol Post that he had become aware of the creature due to the noise it made.

"It was a really strange noise, a high-pitched kind of sound,” he explained. “They say hyenas laugh, but it wasn't quite like that, it was odd, but very loud.

"Then we saw in a field about 40ft away this thing which was making the noise. It was clearly in view, right in front of us, moving away from us. I said to Ashley: 'look at that, it's a bloody hyena!', and Ashley said: 'My God, I think it is!' It was incredible to see right there.

"It was a big thing, bigger than a large dog, but with big shoulders. It ran off, but it didn't really run like a normal dog, it kind of bounced which was the most memorable thing about it. Its back legs sort of hopped as it ran off, not fast particularly, but not running like any animal I've seen before.

Mr Price added: "The strange thing is we were wondering what was making this noise, before we saw it, and suddenly it was in front of us, it was unbelievable.”

Another member of the Everything Portishead group said they had heard something similar in the same area, although due to the poor light could not see what kind of animal was making the noise.

He went out again with some other cyclists on Wednesday evening, and posted to the Facebook group: “Ok. So this has moved on. Two new sightings tonight.

“For legal reasons nothing can be said as to where the animal may have come from, however the sightings could be very real. Be vigilant. Tonight is another night in the valley.”

He told the Bristol Post that when he called police on 101 to report the original sighting, the operator told him they were unable to take action.

"The lady there was a bit dismissive, to be honest,” he said. “She didn't put me through to anyone, but said that without any firm evidence, the police would not be committing resources to it.”

However, Avon & Somerset Constabulary told the newspaper they did not have a record of the reported sighting.

Other exotic creatures people in the area say they have spotted include the “Bristol crocodile” – or perhaps alligator – that has cropped up in news reports over the past three summers, although cynics suggest that what they may have seen is more likely to be of pieces of driftwood floating down the River Avon.