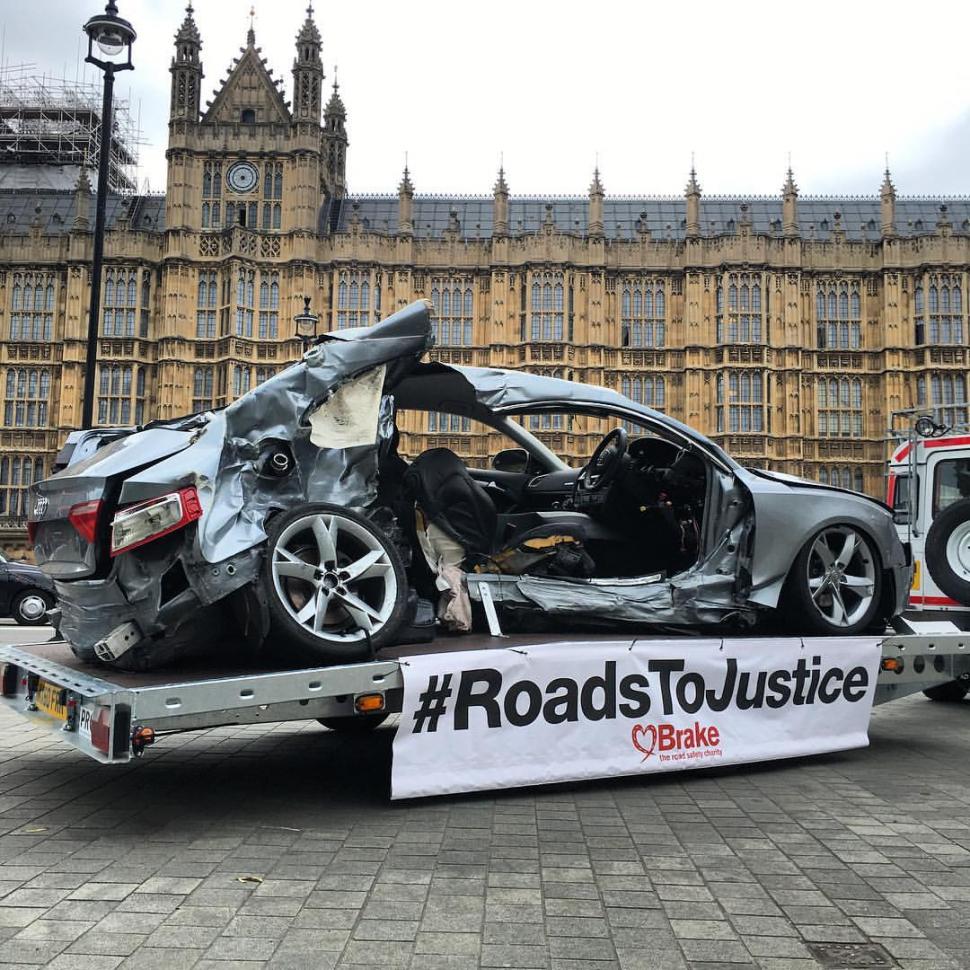 Joseph Brown-Lartey, whose car is pictured, was killed when a driver jumped a red light at 80mph (image by Brake).jpg

Nine out of ten people want law-breaking drivers who kill charged with manslaughter, and road safety charity, Brake, calls on government to act
by Laura Laker

Nine in ten people want criminal drivers who kill charged with manslaughter, according to a survey commissioned by road safety charity, Brake.

The survey, launching the charity’s Roads to Justice campaign, indicates strong support for strengthening both charges and sentences faced by law breaking drivers, with 91 per cent of respondents saying drivers who kill under the influence of drink or drugs should be charged with manslaughter, which carries a life sentence.

Of 1,000 people surveyed, 66 per cent say drivers who kill should be jailed for a minimum of ten years, while 84 per cent say drivers who kill while breaking laws should be charged with dangerous, and not careless driving. Brake says the judicial system often turns its back on bereaved families, by giving killer drivers “insultingly low sentences”.

Has the government's promised driving offences review been shelved?

Joseph Brown-Lartey died when a driver ran a red light at more than 80mph in a 30mph zone.

His parents, Ian and Dawn Brown-Lartey, who are supporting Brake's campaign, said: “We will never get over the loss of our beautiful son Joseph, who had his whole life ahead of him. Hearing that his killer will serve half of a six-year sentence was a further slap in the face to us and our family.”

“The law needs to change so that sentences for causing death by dangerous driving reflect the crime.”

Joseph’s car (pictured), which was split in two in the crash, is being put on public display and brought to the House of Commons today, with the help of Greater Manchester Police.

“We want people to see that devastation first hand in the hope of educating young drivers but also to hit home with the government the importance of our campaign,” the Brown-Larteys said.

Gary Rae, director of communications and campaigns for Brake, said: “There are too many families, like the Brown-Larteys, who suffer the double trauma of losing a loved one in a sudden and violent way, and then witness the judicial system turning its back on them.

“That’s why we’re launching our Roads to Justice campaign, which calls on government to get tough on criminal drivers who kill or seriously injure others. We believe the public are behind us, judging from our survey results.

“People we work with tell us they are left feeling betrayed by the use of inappropriately-termed charges and lenient sentences. Drivers who kill while taking illegal risks are too often labelled ‘careless’ in the eyes of the law, and then given insultingly low sentences when their actions can only be described as dangerous and destructive.”

A petition, started by Brake, calling on strengthened sentencing for drivers who kill and seriously injured, has more than 3,000 signatures.