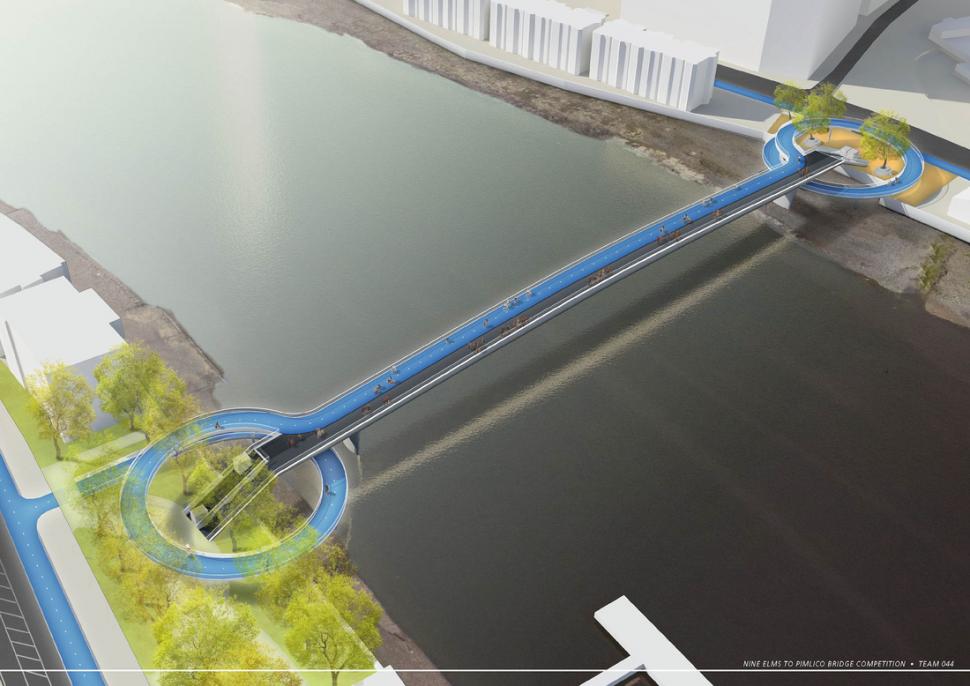 A “strategic” walking and cycling bridge has been put on ice by new London Mayor, Sadiq Khan, following opposition from local residents over the effect of the structure on the local area.

Last year, Danish architecture and engineering company, Bystrup, won an international competition with Robin Snell Architects to design a new £40m crossing. The bridge, proposed to run between Nine Elms to Pimlico, has proved controversial, though, partly due to a loss of green space under current designs, and Khan has now said the project cannot go ahead without support from all affected authorities.

The London Cycling Campaign says although any "sensible" concerns should be addressed, requiring support from all authorities means anti-cycling boroughs could potentially veto schemes, and the Mayor needs to show leadership on cycling and walking.

In a written answer to a question from Labour assembly member, Andrew Dismore, Khan said: “I understand that residents in the Pimlico area have concerns about the proposal and the impact it could have on the local area.

“No further work is being undertaken by TfL at this time and it is clear that any scheme requires support from all affected authorities.”

Khan added “significant environmental and planning issues would first need to be resolved if the bridge was to progress.”

The prospect of the bridge attracted an 800-strong petition last year, raising concerns over the loss of Pimlico Gardens, one of few green spaces in the area, the loss of trees, and the potential passage of 9000 cyclists and/or pedestrians crossing the bridge daily, “ruining the tranquil character of St George’s Square and causing disruption to residents across Pimlico”. There were also concerns raised over traffic congestion, though the petition does not make clear how motor traffic would be affected by the scheme.

In his question to the London Mayor, Dismore called the bridge “a highly expensive vanity project” and suggested Vauxhall and Chelsea Bridge are nearby and should be used instead.

Labour councillors Murad Gassanly, Shamim Talukder and Jason Williams for the Churchill area, said: “We call upon Wandsworth Council to stop the current project and genuinely engage with the local community.

“Wandsworth could have consulted and worked with local people but from their behaviour it’s obvious they’ve never really wanted to work with communities in Pimlico, but want to force through a bridge which will have a major impact on Pimlico without even genuinely consulting them first.”

Wandsworth Council, who proposed the bridge, said: “We fully recognise the concerns local people and ward councillors in Pimlico have raised and clearly there is a need to build consensus before a strategic transport project like this can progress.

“The bridge is still at an early stage of design development and it has always been the intention to carry out wider consultation and engagement work as the outline proposals takes on a firmer shape. Westminster Council and the Mayor of London will be invited to participate fully in this process we want to ensure as many residents as possible on both sides of the river and across London can have their say.”

Wandsworth Council also says the bridge is one of the most affordable infrastructure schemes in London’s pipeline as they have already secured £25m in private sector funding. It says it is important all sustainable transport schemes are fully explored, given the population pressures and air quality issues the city faces.

The London Cycling Campaign's Infrastructure Campaigner, Simon Munk, told road.cc: "We’re very keen for more walking and cycling river crossings. And we are aware the Nine Elms proposal faces some opposition from residents and even councils. So we’re keen the Mayor and boroughs move forward rapidly to resolve any sensible issues regarding location, design etc.

"We don’t however agree every scheme needs 'support from all affected authorities' in every case. That risks handing a veto to the few boroughs that are hostile to cycling and walking schemes. It’s vitally important the new Mayor shows leadership in pushing walking and cycling schemes forward, to fulfil his Sign for Cycling pledges – and that is going to mean bringing less willing boroughs to the table rather than waiting for their support."