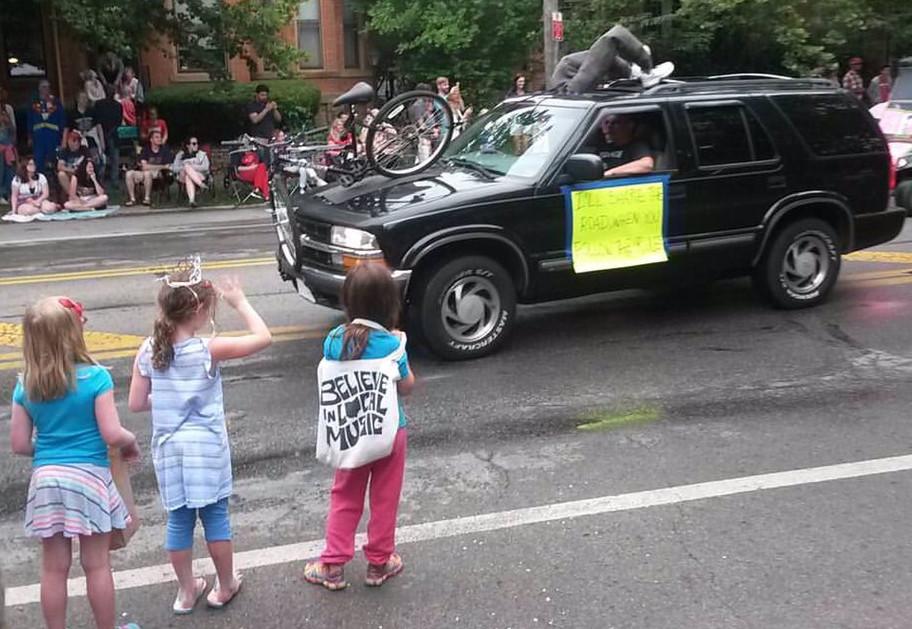 SUV had bicycle on bonnet, legs sticking through sunroof, and message telling riders to "follow the rules"...
by Simon_MacMichael

Organisers of a Fourth of July Parade in Columbus, Ohio have been criticised on social media for allowing a vehicle to take part that had a bicycle attached to the bonnet, a pair of legs sticking out through the sunroof, and a message on the door that read, "I'll share the road when you follow the rules."

Twitter user and local cyclist Spencer Hackett posted a picture to Twitter of the vehicle, which was taking part in the city's annual Doo Dah Parade, which is held on Independence Day.

Similar parades, which combine political satire with a celebration of the First Amendment right to freedom of speech, are held throughout the year in several cities throughout the United States, having originated in Pasadena, California in 1978.

Others are held in Ocean City, New Jersey and, in the city of Kalamazoo in Ohio's neighbouring state of Michigan, where five cyclists were killed last month when a pick-up truck driver crashed into them.

> Full coverage of the Kalamazoo tragedy

So far, Hackett's post has been retweeted more than 200 times with a number of those commenting wondering how the driver was permitted on the parade with his vehicle and that he had gone well beyond what should be classified as free speech.

@velospence What a message to teach these children.

Hackett pointed out that Columbus's city government is pursuing bike-friendly policies, which he suggested may have prompted the motorist's message.

@hykalot Columbus has a great and strong cycling community that is building new lanes/paths by the month, this is just kickback 1/2

1
Police officer caught on camera telling cyclists to ride in single file to be given "education around traffic offences"
2
Why was Mark Cavendish riding with Lance Armstrong this week?
3
Footage of cyclist's encounter with mountain goat "on steroids" goes viral
4
Cycling UK slams Government and threatens legal action for "excluding" cyclists and horse riders from new Wainwright Coast to Coast National Trail
5
Near Miss of the Day 827: Bus driver “bullies his way into a gap that was never there”.
6
Mathieu van der Poel fined A$1,500 after pleading guilty to assault after hotel incident
7
Cyclist hurt after eggs thrown at her by car passenger
8
Five cool things coming soon from Wahoo, Gore, Knog, Pirelli and Bolle