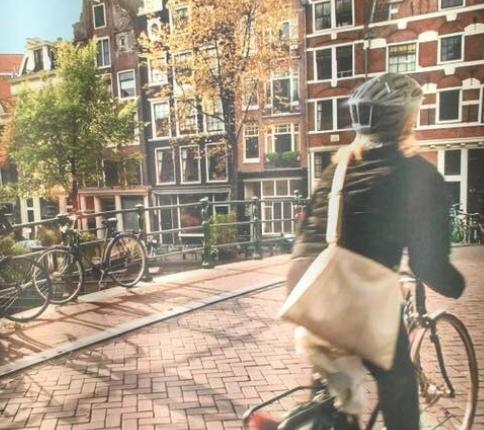 Twitter users who have seen posters call 'fake' - but is Emirates just trying to avoid offending ad watchdog?...
by Simon_MacMichael

An advertising campaign in Australia for the UAE-based airline Emirates has attracted derision on Twitter – because it depicts an Amsterdam cyclist who according to people who have seen the poster in person has clearly had a helmet placed on her head with the help of Photoshop or similar software.

Twitter user @BicycleAdagio posted a picture of the advert to Twitter, with other users of the social network saying that they had also seen it in Perth and Brisbane.

Emirates ad on a bus stop in Sydney. Yes, that's a photoshopped helmet on a cyclist in Amsterdam. pic.twitter.com/tKrJwWtU7p

The Dutch capital, of course, has among the highest modal shares of cycling in the world and among people who use bikes as a means of transport, those who wear helmets are in a tiny minority.

In Australia, cyclists are required by law to wear a helmet, with those who go bare-headed in New South Wales facing a fine of A$319 (£166).

The soft focus of the image posted to Twitter means it’s hard to determine for sure whether or not the image has been manipulated, but user @geoff_tewierik wrote: “Saw one of these joke ads from @emirates in Brisbane the other day too. Clueless marketing department.”

Another user, @cyclingtiger, said: “Sadly I suspect that this is because it's cheaper to photoshop than to put up with angry complaints about helmetless riding.”

Assuming the image was indeed altered, that may have been done so as not to fall foul of the country’s advertising watchdog.

Last year, Australia’s Advertising Standards Board upheld a complaint against a television advert for a health club which included footage of two women riding a tandem without helmets.

The advertiser, Fernwood Fitness Centre, argued amongst other things that the women were riding on private property and were not therefore required by law to wear helmets.

In considering whether the advertisement did indeed breach health and safety guidelines, the watchdog said:

Upholding the complaint, it added:

Overall the Board considered that the advertisement did depict material contrary to prevailing community standards on health and safety.

The advertiser subsequently edited the spot to remove the offending footage, which lasted just 3 seconds.

While in part the Advertising Standards Board’s decision was based on the fact that it wasn’t clear whether or not the women riding the tandem were on the public highway, what is abundantly evident from the Emirates poster is that the cyclist isn’t in Australia at all.