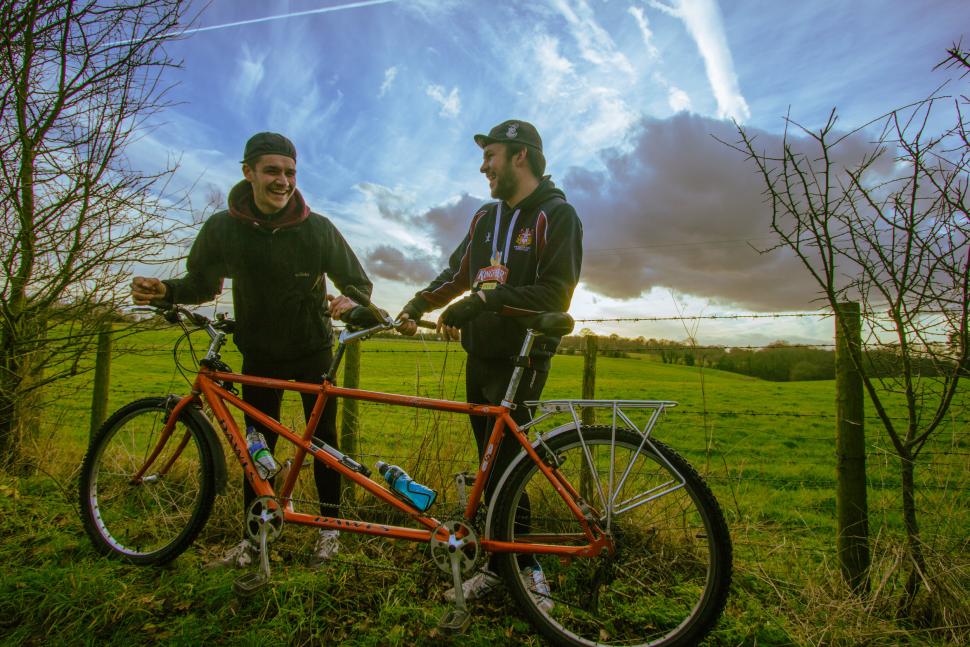 The Tandem Men - image via thetandemmencom.jpg

Two men, supported by Sir Ranulph Fiennes, aim to set a Guinness World Record and "have a bloody good time doing it."...
by Elliot Johnston

Two men have started the first leg of their 18,000 mile, Guinness World Record approved, tandem circumnavigation of the globe attempt.

Supported by legendary explorer Sir Ranulph Fiennes, the two men - John Whybrow and George Agate - who go by the name The Tandem Men, are four days and 219 miles deep into their record attempt.

Whybrow, raised in Norfolk and Suffolk, and Agate, a Sussex boy, met while at university in Canterbury. They both list dreams of seeing the world in their respective profiles on their website, though this isn't just an exercise in human resilience and two young men's dream to see the world.

They have a very ambitious target of raising £100,000 for three charities "who's work changes the lives for many both locally and internationally."

Those charities are: Porchlight a Kent-based homelessness charity which will receive 34% of the money raised, while children's hospital Great Ormond Street and WaterAid will split the remaining 66% down the middle.

If you fancy helping the pair on their way towards their target, you can via their Virgin Money Giving page, here.

The original Guinness-approved route would have seen the pair leave Canturbury and head east through Belgium. However, according to the pair's blog and their FollowMyChallenge page, they've taken a brief detour to Paris to see friends apparently, and the intend to head Eastward soon.

Once the pair make it to Belgium, the plan is to ride down from East Germany down to Turkey and onto Iran before taking a brief flight to Mumbai, India.

From there they plan to ride around India's tip before flying out to Bankok, cycling down to Singapore and flying to Australia. The pair will then ride from Perth to Brisbane, jump over to New Zealand, ride it's length, fly to San Francisco, ride all the way down to Panama, before jumping on a flight from Central America to Morocco.

The final stretch will see the men ride through Spain and France before getting a ferry back to Portsmouth from Cherbourg-Octeville.

Their original route plan can be found below:

You can also follow the pair's progress via Facebook and Twitter, or, if you fancy riding with them, they say they're more than willing to ride with you. Just drop them a line at thetandemmen [at] gmail.com.

Hopefully we'll soon be able to add this pair to our list of the fastest, longest and maddest cycling records!