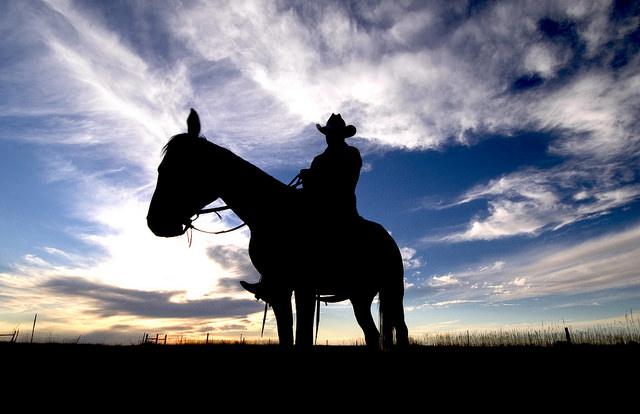 Yee-hah! Cowboy jumps on horse to chase bike thief and lasso him

“I was laughing too hard to intervene," confesses one witness to bizarre scene in Oregon...
by Simon_MacMichael

A thief in the American Far West was thwarted in his attempt to steal a bike when a cattle rancher chased after him on horseback, before lassoing him to make sure he couldn’t get away.

The bizarre episode, which sounds like something out of a Western, happened in a Walmart parking lot in Eagle Point, Oregon, reports the Mail Tribune.

Robert Borba, who once competed on the rodeo circuit, had stopped at the store on his way to California where he was due to brand some cattle when he heard the bike’s owner shouting for help.

"I seen this fella trying to get up to speed on a bicycle," he said. "I wasn't going to catch him on foot. I just don't run very fast."

Instead, the quick-thinking 28-year-old got his horse, Long John, out of his trailer and pursued the would-be thief who discarded the bike and tried to run away.

Borba’s lassoing skills ensured that wouldn’t happen, the rancher throwing the rope around the thief’s legs and dragging him across the parking lot, before dialling 911 to summon the police.

He added: "I use a rope every day, that's how I make my living. If it catches cattle pretty good, it catches a bandit pretty good."

Police sergeant Darin May said:  "We've never had anyone lassoed and held until we got there. That's a first for me."

David Stepp, who watched the drama unfold, said it was the "Best day of my life.”

He went on: “I was laughing too hard to intervene. I’ve seen it all, but I’ve never seen anything like that in my entire life.

“The guy was just hanging back like ‘you ain’t gonna steal no bike in front of me’,” he added.

The suspect, named as Victorino Arellano-Sanchez, 22, was arrested for theft and later bailed.