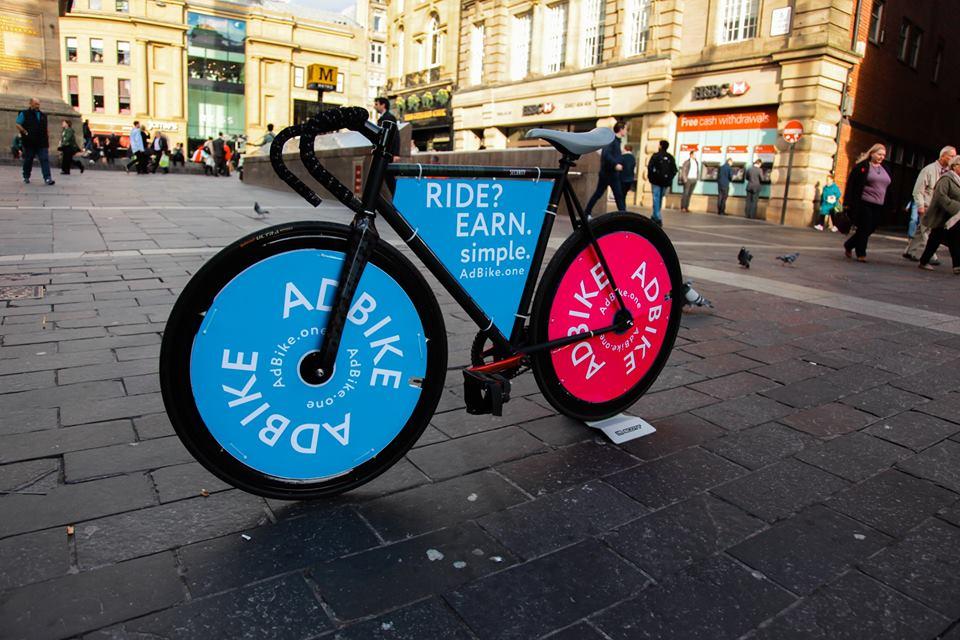 Two business students in Newcastle are launching a scheme that will let cyclists earn money while riding their bikes by carrying advertising on the frame and wheels.

Called AdBike, vinyl stickers advertising local businesses will be attached to plastic boards that fit on the wheels and in the triangle formed by the top, down and seat tubes, reports Chronicle Live.

The initiative, targeted primarily at students who ride bikes, has been devised by Sergey Elizarov, aged 22, and Nikita Zolotukhin, 21, who hope to eventually expand it to other cities.

An app that works on both iOS and Android devices records the time and distance travelled, with cyclists earning ‘points’ that translate into hard cash – and which can vary, for example more are awarded for a campaign targeted at a particular area.

Users have to not only ensure they start an app when they begin a trip, but also need to take a photo of their bike before and after, to prove they did the journey with the advertising in place.

Once a campaign finishes, the riders bring their bike back to AdBike so the next campaign can be mounted on it.

Zolotukhin said: “Say you’re a student living in Jesmond, and five days a week you cycle to campus and back.

“We estimate you could make about £40 a month, just for the journeys you were doing anyway.

“And if you make more journeys, you’ll earn more.”

Since their business has not yet been registered, the founders have been unable to monetise their venture, but are raising awareness through bikes carrying their own branding – although ultimately, they believe it could be as popular as apps such as Uber.

“This is a really good city to start in, we’ve got plans to expand across the North of England next, starting in Manchester,” Zolotukhin added.

More information about AdBike can be found on its website, where prospective riders are told: “Forget the stress of trying to balance working life with the student lifestyle and your studies, and simply jump on your bike and start cycling!

“This is a different option for students who like keeping fit and healthy, or care about the environment, or simply want to try something new.

“Forget part time bar jobs that keep you up all night, forget the nightmare of retail handling customers all day long and forget attempting to scrape together some money from recycling your old textbooks – try AdBike instead.

“This is a great opportunity for the many students who get around our lovely city via bike, if you're already cycling around Newcastle upon Tyne, then why not get paid to do it?”

Using bikes to advertise is a concept almost as old as the bicycle itself, of course, although we’re increasingly seeing a high-tech approach such as through ad panels in London.

> London cyclists can earn while they ride - with digital ad panels

By contrast, the bike we reported on earlier this week advertising restaurant chain Wagamama was a distinctly lo-fi example – and the business was criticised by cyclists for taking up a bike parking space, among other things.