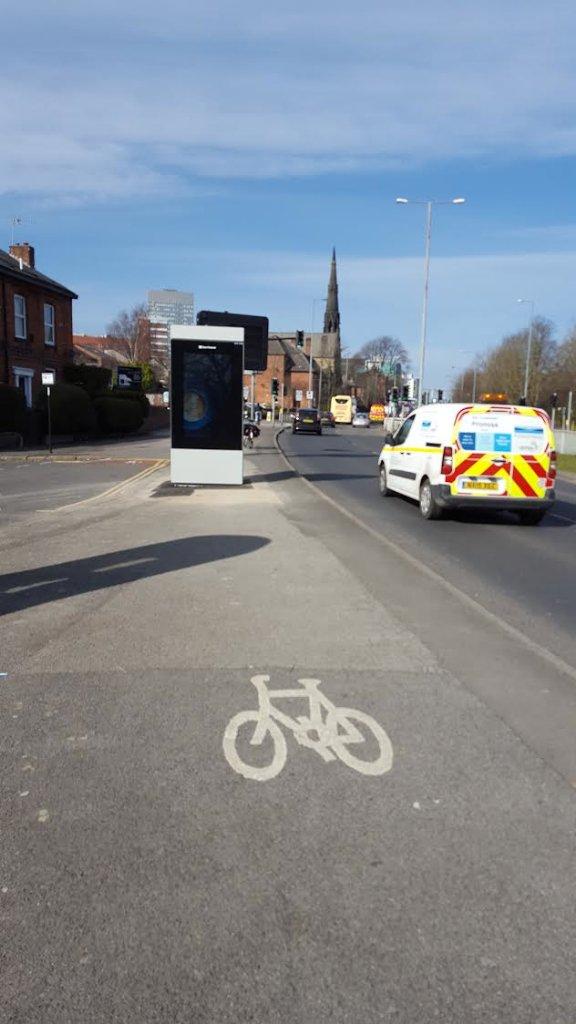 Company Clear Channel reportedly placed the billboard on the bike lane by accident in March, but have so far failed to remove it
by Laura Laker

A billboard has appeared in Sheffield – in the middle of a bike lane.

Cyclists were perplexed when the large sign was installed on a pavement cycle lane on Hanover Way, a busy city centre ring road, in March. However, despite concerns being raised, and the council promising to remove it, the sign remains across the bike lane.

The council told the Star they have asked Clear Channel, the company responsible for installing it, to remove it as a matter of urgency. However, it still remains in place, where it continues to block the bike path.

Anyone got a bulldozer they can lend @CycleSheffield? They need help to remove this from cycle path. pic.twitter.com/ajJKwPNIlz

Dexter Johnstone, of campaign group CycleSheffield, told the Star: “This serves as a good example of the poor provision for people who want to make their journeys by bike and by foot in Sheffield.

“Given the city’s traffic congestion, poor air quality and the health benefits of exercise, the council should be making cycling and walking easier – not inconvenient and potentially dangerous.”

Johnstone says he raised the issue with the council on 17 March, when he says the council told him it should not have been installed there and would be removed.

"The Clear Channel site team was not able to put it in exactly the same location and it was moved to this position where there is insufficient safe clearance between the pavement and Hanover Way.

“As a matter of urgency, we have asked Clear Channel to relocate the panel to a location as close to the original position as possible to allow safe use of the highway by pedestrians and cyclists alike.

“We are working closely with groups like Cycle Sheffield to make improvements to Sheffield’s existing cycle network and thank them for their vigilance in bringing this to our attention.”

A Clear Channel spokesperson told road.cc: "Recently we replaced an ageing advertising site on Hanover Way in Sheffield with a new digital screen.

"Following feedback from local people and our partners at the Council, we are relocating the screen to improve access for the public, including pedestrians and cyclists who use this route. We’re working with the Council to ensure this work is carried out as soon as practical."

When asked to clarify if the matter was being treated as urgent the spokesperson said:

"We are treating this as a matter of urgency and will be re-locating the screen as soon as is practical and safe for both our staff and the public."