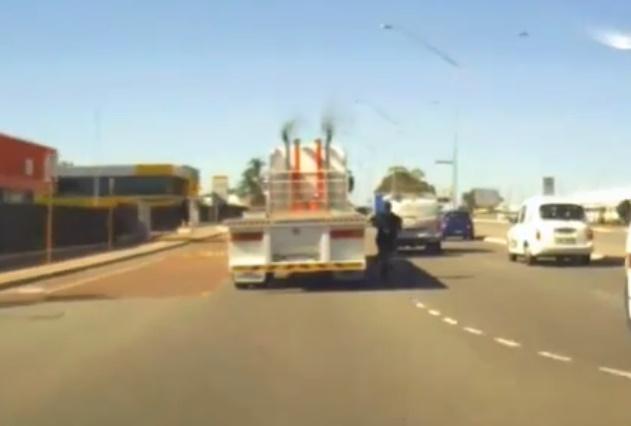 Video: Australian cyclist grabs hold of truck to get a tow

Remember the Manchester cyclist who tailgated a tipper truck at 40mph or the Brazilian cyclist who filmed himself doing 124km/h behind a lorry? This cyclist in Perth, Australia, took the more direct route of simply grabbing hold of a truck and hitching a ride.

The West Australian reports that the incident took place on the Great Eastern Highway in Ascot at around 2.30pm on Wednesday.

Motorist John Richards said the cyclist also caught up with the truck at lights for a second attempt.

“The guy comes out of nowhere on his bike… then he hangs on to the back of a lorry, it’s like something out of a video game.

“He started weaving about and I started thinking about the consequences – that truck’s got 18 wheels on it and there’s all this traffic around us.”

Richards said that traffic backed up behind the cyclist as drivers were reluctant to pass.

“They couldn’t overtake the lorry because they weren’t sure what the guy on the back was going to do. Potentially I could have hit him,” he said.

“At the end of the day, it’s incredibly dangerous for a number of reasons – including unexpected braking or acceleration – but in this case the danger is exacerbated by the fact that the bloke doesn’t even appear to be wearing a helmet.”

1
Two cyclists killed in Buckinghamshire crash involving Volkswagen Golf car
2
James May urges Prime Minister Boris Johnson to “bomb us with bicycles” with £80bn HS2 cash
3
Fractured spine for Yorkshire cyclist after hit-and-run motorist ‘deliberately’ drove at riders
4
Decathlon launch a new entry-level gravel bike, the Triban RC 120
5
“A small, almost nothing, story” – Mark Cavendish hits back at report he may miss Tour de France
6
What do the new lockdown ‘groups of 6’ rules mean for cyclists?
7
Near Miss of the Day 416: HGV driver powers past cyclist despite oncoming van – police take very swift action
8
Police retrieved "five pieces of fingers" from the Humber Bridge after a cyclist fell off his bike