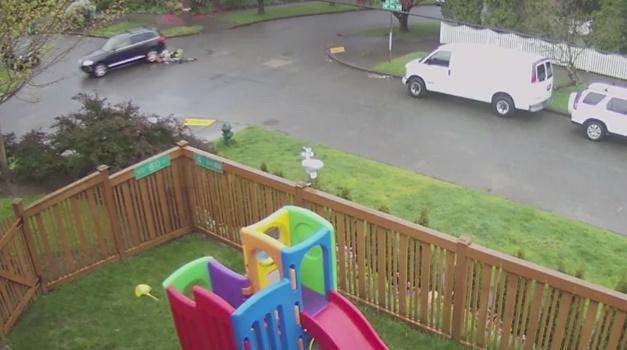 Near miss for cyclist's head after crossroads encounter with SUV

Footage caught on a security camera shows the moment when a cyclist narrowly avoided falling under the wheels of an SUV which was travelling across his path at a junction in West Woodland, Seattle, Washington, USA.

The cyclist approaches the crossroads and turning his head sees that a black SUV is about to drive straight across in front of him. Slamming on the brakes, he skids, turns sideways and topples over just as the car is passing, the vehicle’s rear wheel seemingly inches away from his tumbling body.

Picking himself up afterwards, he limps back towards his bike. The driver stops, gets out and approaches. We’re no experts on body language, but the person looks to be checking that he is okay. The cyclist then walks his bike to the side of the road.

"The cyclist was so lucky not to be squashed. I watched the incident live. I saw him ride off on his bicycle and he appeared to be shaken. He didn't have any major injuries but I assume he is very bruised today.

Pierce said there were accidents and near misses at the junction daily.

"It's an uncontrolled crossroads, which means there are no stop signs. That is one of the reasons we installed security cameras so we can provide video to those involved in accidents and police if needed."